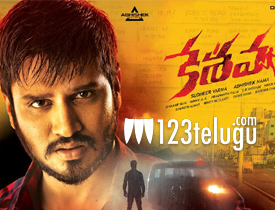 Right from the time the trailers of Keshava released, there has been a superb buzz for this film. The makers have gone all out and also promoted the film on a huge scale. The gritty revenge drama has finally hit the screens today and lets see how it is.

The story of the film is based on a law college student called(Keshav) who is on a hunt down to kill all those who destroyed his family in a dreadful accident. Keshava commits a series of murders and a special officer(Isha Koppikar) is appointed to deal with the case. Rest of the story is as to how Keshav dodges the cops and completes his revenge with the help of Satyabhama(Ritu Varma).

Keshava is undoubtedly Nikhil’s film till the last scene. Credit should go to the young actor for choosing such a dark role and essaying it with a lot of ease. Nikhil’s performance is one of the biggest assets of Keshava. Right from the first scene, he holds his emotions with and showcases how intense he can get in his act. The way he goes about committing his crimes and gives a settled performance will win him a lot of applause.

Yet another advantage of the film is the stylish narration by Sudheer Varma. Even though he chooses a routine script, the way he has showcased it in a stylish manner is what clicks. The way he reveals the film chapter wise and brings in various twists in good. Vennela Kishore’s comedy works supremely well for the film. The ace comedian is in his elements with his subtle yet hilarious act.

Ritu Varma looks decent and ably supports Nikhil in all his endeavors. The suspense that is generated throughout the first half is very good and has been showcased in a gripping manner. Isha Koppikar makes a decent comeback and is a perfect fit as the cop. Anasuya’s voice suits Isha completely.

The story of the film is quite simple and there is nothing much to look forward as the film runs completely on the screenplay. Even though the motive is good enough for the hero to take revenge, things could have been showcased in a more gripping and harsh manner for the audience to get connected.

The heart disorder which is showcased through Nikhil’s character has not been dealt well. The director had a good chance of elevating the proceedings trough this problem but he missed out on the chance.

Keshava is a very stylish film that has come out in the recent past. Diwakar Mani’s camera work is astounding as he maintains the mood of the film with his lighting and intense visuals. The drone shots used to showcase the various chases and tense scenes look amazing. Background score is okay and could have been better. Sunny M R’s music is just about okay and has nothing much to talk about. Editing is quite sleek and so was the art direction. Production values by Abhishek Pictures are top notch as the small towns in Godavari region have been showcased lavishly.

Coming to the director Sudheer Varma, his strength has always been a stylish narration and with this film too, he has made a simple subject look quite intense. The way he goes about extracting performance from Nikhil and presents the film is a serious note is very good. Credit should go to him for not shying away from the theme by adding unnecessary commercial elements. However, he hurries up the film during the second half and takes some cinematic liberties.

On the whole, Nikhil once again lives up to his expectations and comes out with a different crime thriller. His performance is top notch and is the mainstay of the film. Stylish narration by Sudheer Varma, engaging first half and arresting visuals are basic assets of the film. However, the film dips slightly during the second half with too many things happening quickly. If you keep your expectations in check and go well prepared, Nikhil and team will ensure you a stylish crime thriller to watch this weekend.