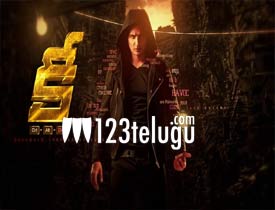 Yet another Tamil film which has been dubbed in Telugu in the Jiva and Nikki Garlani starrer Key. Based on cybercrime, this film has hit the screens today. Let’s see how it is.

Siddhu(Jiva) is a hacker by profession and keeps hacking personal info from the mobiles of beautiful girls. In this process, he gets introduced to Vandana(Anaika Soti) and their journey starts off as friends. During the same time, he falls in love with Siri(Nikki Garlani). When everything seems to be going fine, Siddhu gets suddenly attacked by a group which is connected to Vandana. Who is this group? Why are they after Siddhu? and how is Vandana connected to all this? To know this, you need to watch the film on the big screen.

One of the biggest assets of the film is its visual effects which have been done on a wonderful note. The pre-climax scenes have been narrated in a thrilling manner. Also, the manner in which how technology is good and bad for society is showcased looks convincing. Rajendra Prasad and Suhasini as hero’s parents brought a lot of depth to the film.

Jiva is impressive in his hacker’s role. When compared to his previous films, Jiva looks good and has improved with his performance. Nikki Garlani looks beautiful and does a good job in her key role. Anaika Soti is impressive in her supporting role. Actress Hanu, who did a serious role in the film was quite impressive.

Though the story idea is good, the execution was not that impressive. There are many scenes in the second half which were unnecessary and could have been edited out. They not only drag the proceedings but also irritate the audience for no reason.

For the first half an hour, there is not much clarity in the film as things are not narrated effectively. Some scenes between the lead pair have been added just for the sake of it and bore the audience in the first half.

The logic goes for a toss and the unforced comedy also does not work. There was good scope for the director to add more mind games between the hero and the villain but he missed it totally narrating the film in a flat manner.

Editing should have been better in the second half. Music by Vishal Chandrasekhar was impressive and so was his background score. Camera work was decent and so were the production values. As said earlier, director Kalees had a good concept but his narration was jaded and miss the mark.

On the whole, Key is a film does which not work in many aspects. Though the idea and pre-climax are good, the rest of the execution was below par. Apart from this, boring comedy, dull romance and lack of basic conflict point spoil the film in no time and makes it a boring watch for the audience.