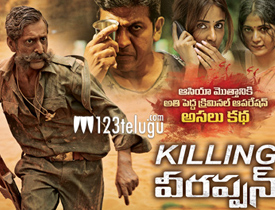 The trailers of Killing Veerappan have given a feel that maverick director Ram Gopal Varma is back to his best. The film which deals with the real life story of the dreaded sandalwood smuggler has hit the screens today. Let’s now see whether RGV is back in the reckoning or not.

The story of the film is quite simple and is narrated with a police officer’s point of view. Veerappan(Sandeep Bhardwaj) is a dreaded sandalwood smuggler with tons of cases on him. Cops from three different states are after him over a period of ten years but to their bad luck, he escapes unhurt all the time.

This is also the time when the case is handed over to a sincere police officer(Shivraj Kumar) who takes things in his hands. He makes several plans but somehow turns unsuccessful all the time. Rest of the story is as to how he makes one final dreaded plan and kills the most wanted smuggler.

Credit should go to Ram Gopal Varma for getting his casting absolutely bang on. The way he has chosen a new face for Veerappan’s role is spot on and gives you a dreaded feeling right from the first frame itself. The Mumbai actor looks astonishingly close to Veerappan and strikes vengeance from the word go.

The locations chosen, realistic set up and the dense forest locations give a superb effect to the film. The various assassination plans to kill Veerappan and the way they have been executed is quite good. Coming to the performances, Shivraj Kumar is pretty good as the cop and holds the film together. The way RGV has showcased him is pretty decent.

Several other supporting characters, especially Yagna Shetty who played Veerappan’s wife is very good in her role. Major credit should go to the way RGV has revealed some startling facts about certain real life events. The main aspect which goes well is that RGV has showcased Veerappan in a normal way and not in a cinematic and larger than life character.

One of the biggest drawbacks of the film is that Veerappan has very less screen space. His story is untold as his past or the way he became so strong, points like these have been left to the back burner. All those who wanted to know more about Veerappan and his personal side will be disappointed a bit.

The film is narrated in a complete cop view and how they manage to nab him. In this regard, certain logics and cinematic liberties have been left behind which is clearly visible on screen. The first half is a bit normal and the tempo only builds up during the second half.

As in all RGV films, technical aspects are a huge plus. Staying true to its genre, the film has some breath taking visuals. Camera work is astonishing and gives an insight on how the dreaded smuggler lived his life in the dense forests and difficult situations. The top angle visuals during the pre-climax are just awesome.

The various thrills and montage shots have been executed supremely well by RGV. Background score is a bit let down as a better score could have elevated the film to a different level. Screenplay by RGV is neat as he sticks to the conflict of nabbing Veerappan and does not include any cinematic scenes.

Coming to RGV, Killing Veerapan is one of his best works in the recent past. You find traces of vintage RGV as he showcases how the dreaded smuggler was killed in real life. Had he increased a little bit screen time of Veerappan and showcased his personal side or how he became so famous, the film would have been even better.

On the whole, Killing Veerappan is surely RGV’s most decent films in the recent past. It is a realistic tale of how India’s most wanted criminal was gunned down with some superb visuals, interesting narration and top notch performances. On the flip side, non detailing on Veerappan and his less screen time may not go well with certain audience. All said and done, this film is a decent watch for its realistic nature and some gripping assassination episodes.