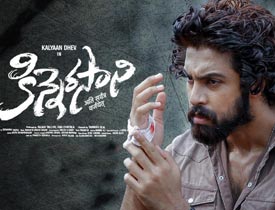 Kalyan Dhev is ready with his new film Kinnerasani. The film has skipped its theatrical release and is now streaming on Zee5. Let’s see how it is.

Vedha(Ann Sheetal) starts a small library in Hyderabad. One fine day, she comes across a book that reveals her own father(Ravindra Vijay) is avenging her death. An upset Veda seeks the help of a lawyer Vikram(Kalyan Dhev) who is also connected to the story written in the book. What is this book all about? What is Veda’s connection with the book? Why is her father avenging her death? and how does Vikram come to her recue? To know all this, one needs to stream the film on Zee 5.

The basic plot written by Sai Teja looks interesting and has been set up well. Ann Sheetal, the Malayalam actress gets a key role and she is quite impressive as Veda. The way she gets tense in all the thrilling scenes has been emoted well by the young actress.

Kashish Khan plays the second lead and is good in her limited role. Kashish’s chemistry with hero Kalyan Dhev looked good. Kalyan Dhev has improved a bit when compared to his previous film Super Machi. He gets an intense role and suits the mood of the film.

The main villain played by Ravindra Vijay is the best part of the film. His performance brings some depth to this thriller in key scenes. Ravindra Vijay is very good in all the jail sequences and creates some interest for the audience through his intense look and deep voice.

Even though the plot is good, the narration needed to be more gripping in the film. There are not many twists and turns in the second half and this is where the film bogs down a bit.

The crime setup is handled well in the first half but loses out of its steam in the latter part. More gripping thrills and drama would have elevated the scenes even better in the pre-climax.

Kalyan Dhev’s character is not utilized properly and looks a bit disconnected from the whole plot initially. The story kick starts with a book and more whereabouts of it should have been established in a better manner.

Sagar Mahati has scored the music and its average. But his BGM was pretty good. The production values could have been better. The editing is crisp as there are not many lags in the film. The screenplay by Sai Teja is effective in the first half.

Coming to the director Ramana Teja, he has done a passable job with the film. His narration should have been gripping with more dramatic emotions to thrill the audience. Not that the film is bad but it lacks the strong punch which the thrillers generally need.

On the whole, Kinnerasani has an interesting setup and passable thrills in the first half. But the needed drama and suspense in the second half are missing making the proceedings dull. If you ignore these aspects, this film can be given a shot and ends as a passable OTT viewing.