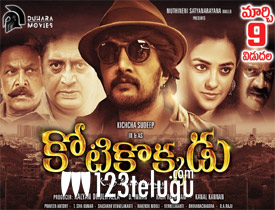 Banking on the craze of Sandalwood hero Sudeep, the makers have dubbed his 2016’s hit film Kotigobba 2 in Telugu. Titled as Kotikokkadu, this film has hit the screens today. Let’s see how it is.

Satyam(Sundeep), a real estate agent is a soft and kind-hearted person. On the other hand, his look-alike brother Shivam(Sudeep) loots black money from big shots. After a point in time, it becomes tough for the police to find out who among the brothers is the actual culprit. Who are these two brothers? What are they up to? Is there a twist to the double role? To know this, you have to watch the film in theaters.

Undoubtedly, Sudeep’s acting and his impressive screen presence are one of the basic plus points for the film. The way he performed in both the characters of Shivam and Satyam is quite interesting. Heroine Nithya Menon looks cute and gave an impressive performance in her role as hero’s love interest.

The flashback episode which shows the emotional angle between the father and son has been showcased well. Versatile actor Prakash Raj, who is seen in an important role has yet again delivered a superb performance as a lovable father.

Though the storyline of the film is decent, it lacks proper depth in the proceedings. The slow and predictable screenplay is a big minus for the film. Apart from the flashback episode, the entire second half is boring.

The way Sudeep’s character cheats police and public by projecting himself in a dual role is not convincing and looks a bit over the top. The pre-climax and climax sequence look dragged and makes the audience to look at the exit doors.

Senior director, KS Ravi Kumar, who earlier delivered some good emotional entertainers has come up with yet another decent storyline. But he fails to execute it with some hard-hitting emotions. If he would have narrated the plot with some engaging moments the output could have been even better.

Editing by Praveen Antony is just about okay as a few unwanted scenes in both the halves could have been chopped off. Cinematography by Rajarathinam is decent. Music by D. Imman is okay as a montage song in the first half and a duet in latter half are good both audio and video wise. Production values are good for this high budget entertainer.

On the whole, Kotikokkadu has a decent storyline but falls flat with its predictable proceedings. Though the flashback episode and Sudeep’s acting are good, the lack of engaging moments and convincing screenplay may not appeal to a larger section of the audience. Those who are looking for a good popcorn entertainer this weekend can skip this film and look for an alternative option.