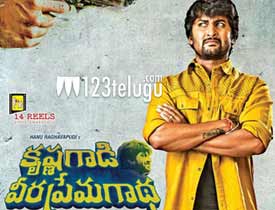 After scoring a huge blockbuster in the form of Bhale Bhale Magadivoy, Nani is back with a romantic thriller Krishnagadi Veera Prema Gadha. Directed by Hanu Raghavapudi, this film has hit the screens today. Let’s see whether it gives Nani his second consecutive hit.

Krishna(Nani) is a carefree youth in the faction rich area of Rayalaseema. He is in love with his childhood sweetheart Mahalaxmi(Mehreen) but is scared to death to reveal it to her family.

One fine day, Krishna lands at Mahalaxmi’s house to confront her brother. This is also the time when Mahalaxmi’s family is attacked by their opposition gang in the village. To his shock, Krishna finds out that Mahalaxmi is not available at the house but her entire family is destroyed except for Mahalaxmi’s three little nephews.

Left with no choice, Krishna runs away with the kids to save them. Rest of the story is as to how Krishna manages to save these kids and ends up winning his love amidst a huge chaos which also involves a dread mafia don.

One of the biggest plus points of the film is the writing. The script is quite new and the way it is told in a commercial format is also entertaining. Nani is the star of the film and once again gives an honest performance. He is at ease and carries his cowardly role with aplomb. Nani’s comic timing and the way he pulls of his innocent act during crucial scenes is superb.

Mehreen makes a confident debut and looks convincing as the village belle. Performance wise too, she is decent and has a long way to go. Yet another major plus point of the film is the quirky love story.  All the romantic scenes and the way Nani’s love track is showcased is quite novel. Certain twists and chases that come during the second half are good. Brahmaji is pretty good in his cameo.

First half of the film is hugely entertaining and has some good comedy as well. Satyam Rajesh’s scenes with Nani evoke good laughter and makes things breezy. The various twists that are showcased featuring mafia don Murali Sharma and all the mistaken identity scenes featuring him and Pruthvi have been placed well in the film.

The film is a bit lengthy and if the makers act quickly and edit out some unnecessary scenes, the out put will be even better. Towards the end of the first half, one gets a feel that the proceedings are dragged a bit too much. All the major twists are revealed during the pre-interval block only.

Two songs which come during the second half are huge speed breakers and spoil the flow of the film big time. Post the interval, the film moves on a single point agenda and the proceedings get a bit routine.

14 Reels should be credited for their outstanding production values. All the locations chosen and the way they have been showcased through the excellent camera work is appreciable. Music is decent and the back ground score also elevates the film well. Dialogues are good but at least ten minutes in the first half and a couple of songs need to edited out.

Coming to the director, Hanu Raghavapudi, he has done a pretty good job with the film. His writing is very strong and the way he has mixed the love story with thrilling elements speaks volumes of his talent. Had he planned his interval bang correctly and placed some more interesting scenes during the second half, the output would have been even more racy.

Whenever Nani picks up a script, you are bound to expect something new. The same happens with Krishnagadi Veera Prema Gadha as the interesting love story is narrated with some good thrilling elements. Nani’s natural performance, breezy first half and good twists are huge assets. Barring the excessive length and certain lags during important scenes, this film ends up as an entertaining watch and will surely be yet another feather in Nani’s cap.