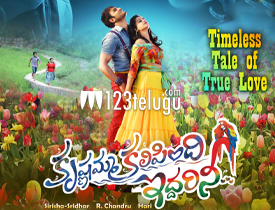 Dynamic producer Lagadapati Sridhar, is back with an interesting love story in Krishnamma Kalipindi Iddarini. Starring the hot pair Sudheer Babu and Nanditha in lead roles, this film has hit the screens today. Let’s see how it is.

Krishna(Sudheer Babu) and Radha( Nanditha) are childhood friends who are very close to each other. They go to the same college and spend some good moments together. This is also the time when Krishna falls in love with Radha and decides to propose to her.

Sadly for Krishna, destiny has other plans and forces him to part ways with Radha and leave his love story behind. Similar situations arise for Krishna when he once again meets Radha during his engineering days and also when he gets a good job.

What are the problems that Krishna is facing time and again ? Does he manage to reveal his love for Radha ? and Will the couple reunite at the end ? To know answers to all these questions, you need to watch the film on the big screen.

Krishnamma Kalipindi Iddarini is probably Sudheer Babu’s career best performance. He is stupendous in the role of Krishna and carries the entire film on his shoulders. Sudheer is especially good during the climax and showcases wonderful emotions. Nanditha looks perfect in her role and gives able support to Sudheer. Both the actors are on par with each other and share a dazzling chemistry.

The way love has been showcased during different time zones is pretty good. Krishnamma Kalipindi Iddarini is high on emotions and the makers have succeeded in carrying it throughout the film. The twist that comes during the climax has been executed well.

The biggest drawback of the film is the placement of two songs which disturb the flow of the film completely. Pace of the film is quite slow and takes its own time to complete. The college scenes in the second half have been dragged to unnecessary extent. Chaitanya Krishna’s character lacks focus.

There is a slight lag in the narration during the post interval as the makers have forced some unnecessary commercial aspects. Posani’s track with Saptagiri and certain other scenes spoil the mood of the film.

Camera work of the film is wonderful and showcases the rustic rural set up well. Production values are top notch and the way the film is showcased in different time zones is decent.

Music is good as all the songs have been composed well. Screenplay of the film is simple and gets slightly disturbed during the second half. Coming to the director Chandru, he has done a decent job with the remake. The only place where he falters is when he adds unnecessary commercial elements and forces to film to go off track.