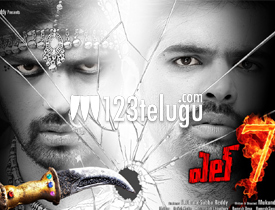 Continuing the trend of horror flicks, yet another film which has hit the screens today is L7. Starring Adit and Pooja Jhaveri, let’s see how this film turns out to be.

Arun(Adit) and Sandhya(Pooja Jhaveri) are a newly married couple who move into a house to start their martial life. As expected, the house is haunted and things start falling apart for the couple as Sandhya stars behaving quite weirdly.

Left with no choice, Adit does a weird experiment and finds out that his wife is possessed. Who is behind all this ? What is exactly happening in the house ? and how does Adit solve his problems ? That forms the rest of the story.

Even though the film had a routine story like any other horror flick, the flashback showcased is a bit interesting. The experiment done by the hero to find out whether the house is haunted or not has been executed quite well. The way the major twist has been amalgamated during the climax is impressive.

Vennela Kishore’s comedy timing and performance are pretty good. Adit Arun is very impressive in his role. Pooja Jhaveri is top notch in her character and gives a striking performance as the ghost.

The story of the film is quite routine and predictable. Except for the flashback episode, things move on a simple note. A haunted house, flashback, and some scary scenes, stuff like these has come in many films till now.

The makeup done for the heroine in the second half is very poor and irritates the audience. Yet another drawback of the film is that the actual story starts only from the pre-interval block.

Most of the major scenes remind you of previous horror comedies. The logic goes for a toss in many areas. Two songs in the first half could have been removed.

Camerawork of the film is very good. Music of the film is very poor but the background is immpressive. Editing is fine and production values are also decent. Coming to the director Mukund, he has done just an okay job. Except for the interesting flashback, rest of his narration is quite routine.

On the whole, L7 has an age old storyline and horror elements. But an interesting narration, good interval bang and an engaging flashback make this film interesting. If you don’t expect anything new and just go with the flow, this film might end up as a watchable fare this weekend.