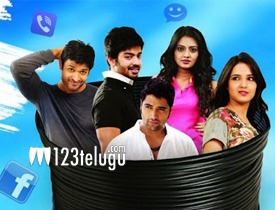 Madhura Sreedhar has been making some interesting films for quite some time now. His latest production is Ladies & Gentleman which has hit the screens today. Let’s see how it is.

This film is based on the story of three different individuals who get affected by the perils of modern technology. The first story has Mahat Raghavendra, a cunning call center executive who keeps finding ways to earn black money. Moving on, the second story has Chaitanya Krishna who falls in love with a girl through facebook.

The last story is that of Kamal Kamraju and Nikita, a couple who face domestic problems and whose lives get effected with the entry of the wife’s former boyfriend Adavi Sesh.

The Rest of the film is about how social media affects the lives of these individuals and what happens to them at the end.

Concept of the film is a huge plus. The way the harsh realities of today’s fast paced life have been showcased in a contemporary manner is pretty good. Even though all the stories are simple, the way they have been ended is eye opening and merits an applause. Adavi Sesh is superb and carries off his character quite cleverly.

Chaitanya Krishna has done an excellent job as the innocent college going youth. Nikita Narayan and Kamal Kamaraju have shown a lot of maturity in their respective characters. Mahat Raghavendra is ok as the cunning youth. Climax of the film is thrilling as each story has been given a deserved ending.

‘Ladies & Gentleman’ is quite bold and the makers need to be appreciated for the fact that they have stuck to the plot without any commercial angles. The underlying message that is showcased will surely go down well with the youth.

Songs are a big let down in the film. The flow is seriously obstructed and all the songs could have been easily avoided. This film is a concept driven flick and all those who are looking for some light hearted fun might be disappointed. Title of the film is also misleading. Had the makers gone for a more apt title, the response would have been even better.

First half is a bit slow when compared to the second. The way the story is established during the beginning of the film is a bit rushed. Mahat Raghavenra’s character takes too many liberties without getting caught and it is a bit unbelievable. The reach of the movie will be limited as the concept is city based and might no go well with B and C centers.

Music by Raghu Kunche is decent and the title song has been conceived well. Backgroundscore is good and so are the dialogues. Screenplay of the film is crisp as all the three stories have been narrated without any confusion.

Director Manjunath has impressed with his first outing and has narrated the multi-faceted story in a thrilling way. The way he has showcased the harsh side effects of internet based relationships is clear and to the point. Editing is fine and so is the camerawork.

On the whole, Ladies and Gentleman is one film which has been made with absolutely no commercial angles. It is bold and concept driven yet interesting. All those who like to watch films with a message, and want to know the harsh realities of today’s fast paced life,can definitely give this film a shot.