Review : Lakkunnodu – Only for few laughs 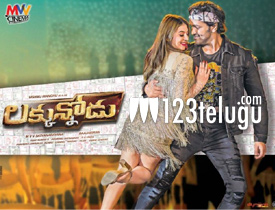 After the good success of Edorakam Adorakam, Vishnu Manchu is back with yet another commercial entertainer called Lakkunnodu. Directed by Raj Kiran, this film has hit the screens all over today. Let’s see how it is.

Lucky(Vishnu) is a happy go lucky youth who is disliked by his father as he always brings bad luck into the family. On the other hand, close to 25 crores of new currency is looted by a deadly criminal(M V V Satyanarayana) who in turn gets cheated by his close aide.

The twist in the tale arises when Lucky accidentally stumbles upon this amount. Rest of the story is as to how Lucky manages to handle the huge cash and successfully gets it back to where it belongs. Also, how does he manage to impress to his dad and where does Hansika feature in this entire set up forms the other part of the story.

The last fifteen minutes of the first half are the major assets of the film. The twists that are showcased during this time are quite interesting and have been executed quite well. Vishnu Manchu does his role sincerely and is a perfect fit in the entire set up. All his scenes with Posani and Prabhas Seenu have come out well.

The comedy that is generated between Vishnu and Satyam Rajesh evokes good laughs. Hansika looks beautiful but does not have much to do in the film. Vennela Kishore evokes some laughs here and there. Posani is efficient in his character and brings some relief during the second half.

One of the biggest drawbacks of the film is the second half. After setting up the film nicely till the interval block, the story becomes quite silly as there is no seriousness in the proceedings. The way Vishnu makes a fool of the main villain looks over the top in some scenes.

Songs act like speed breakers and have been placed in wrong areas. A better and established villain could have made things a lot better. The family emotions showcased do not have much depth in them. Vishnu and Hansika’s love track should have been more entertaining.

Dialogues by Diamond Ratna Babu are decent and so was the music by Achu. Production values were top notch and the background score was also impressive. The camera work is decent and showcases Hyderabad and the other set up of the film in a rich way.

Coming to the director Raj Kiran, he has done a very average job with the film. He sets up things quite interestingly for the second half but falters in his execution. The way he designs the cat and mouse game between the hero and villain is below average as there are many weak links and logics which go missing.

On the whole, Lakkunnodu has some decent moments going its way. An interesting interval block, good comedy by Vishnu and gang are some assets. However, a slightly dragged out second half and lack of grip in the proceedings during this time makes this film just an okay watch this weekend.