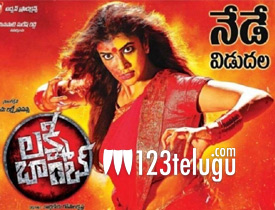 After a long gap, Lakshmi Manchu has come up with an interesting film called Lakshmi Bomb. The film which has Lakshmi Manchu playing a judge’s role has hit the screens today. Let’s see how it is.

Lakshmi(Manchu Lakshmi) is a session court judge who announces a severe punishment to a local goon(Prabhakar) on charges of human trafficking. Upset with this, the dreaded gangster attacks Lakshmi with his entire gang and kills her.

Right when you think what is actually happening, yet another Lakshmi comes into the picture and starts taking revenge on these goons. Who is this new Lakshmi? What does she have to do with the entire set up? and how does she take her revenge? That forms the rest of the story.

Manchu Lakshmi is the only major attraction of this film. With whatever role she had, Lakshmi performs with the best of her abilities and tries to bring some depth into the proceedings. The first twenty minutes of the film are a bit okay and Lakshmi does a decent job with her emotions.

Posani Krishna Murali and Hema are decent as Manchu Lakshmi’s parents. The emotional scenes featuring these three have come out decently during the first half. Kalakeya Prabhakar is just about okay in his film and does his part well.

The story of the film is quite weird and does not sink with the proceedings showcased. Lakshmi Manchu’s second character and the way she is induced into the plot looks over the top. There are several scenes which are quite repetitive and irritate the audience. Jabardasth Rakesh and Mirchi Hemanth’s comedy track is outright atrocious and tests your patience to the core.

Also, the way the director has narrated the film is pretty upsetting. Post the first fifteen minutes, the film disappoints and has nothing much interesting going its way with regular revenge drama becoming the film’s forte.

Production values of the film are below average as the film looks quite dull in many places. Music is just about okay and luckily the songs do not disturb the flow of the film. Editing is okay but the screenplay is very disappointing. The manner in which the story unfolds creates so much confusion and doubts in the minds of viewers. Camera work is just about okay.

Coming to the director Karthikeya, he has done a very bad job with the film. None of his scenes impress in the second half as the plot chosen also looks over the top and a bit hard to believe.

On the whole, Lakshmi Bomb is a below average revenge drama which gets messed up by some lack-lusture narration in the second half. Except for Lakshmi Manchu’s sincere efforts in a double role, this film has nothing much to offer and can be watched when it is aired on television.