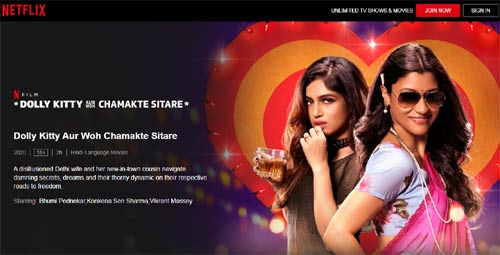 So, continuing the series of reviewing movies and shows during the lockdown period, our today’s pick is the latest Hindi film Dolly Kitty Aur Woh Chamakte Sitare. The film is available on Netflix and let’s see how it is.

Dolly Kitty Aur Woh Chamakte Sitare is a film about two sisters who have their own issues in the city of Delhi. Dolly(Konkana Sen Gupta) is a working woman who is unhappy with her sex life. Then, there is Kitty(Bhumi Pednekar), a single woman who is forced to work at an online dating App. Both these sisters have their own issues and Dolly starts an affair with a delivery guy(Amol Prasha) whereas Kitty finds her love in the form of her co-worker Pradeep(Vikrant Massey). But life is not as easy as the choices of these women are hard to get. How do their lives change and will they get the desired love forms the rest of the story?

Performance-wise, this film is top-notch. All the actors perform to the best of their capabilities. Konkana Sen Gupta as the woman who has a fling with a young guy is amazing. Her role has various layers and Konkana showcased it in a solid manner. Bhumi Pednekar, as the struggling young woman is also good. Her role is amazing and Bhumi gives it her own twist with a subtle performance.

The film deals completely with female desires and how one needs to go about it. The set up of both the female characters is quite realistic and showcases the harsh fatalities of life. The build-up and first half of the film are very good.

Vikrant Massey is adorable in his role. There are a few scenes that showcase how women should go ahead in life and choose your priorities in life. This aspect looks good. The BGM and dialogues are very good in the film.

The first is started on a very gripping note and the middle class set up is showcased beautifully. Both the female characters are also derived well but it is the second half and climax that spoil the fun completely. The ending looks a bit odd.

The film is a way too bold and goes against your regular norm of how women should live life in India. So, some might not like the bold attitude of this film. Also, there are way too many subplots that take away a lot of time.

On the whole, Dolly Kitty Aur Woh Chamakte Sitare is a film on the lines of Lipstick under my Burkha and is directed by the same filmmaker Alankrita. The film is quite bold, has a good premise, solid first half, and taut performances. But it is the second half that faulters and kills the interest of the audience. If you like Lipstick Under my Burkha, this film also deals with almost the same theme and ends as a passable watch.