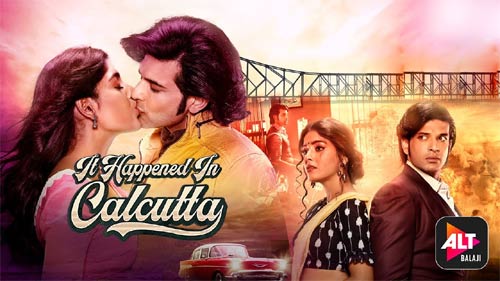 So, continuing the series of reviewing movies and shows during the lockdown period, our today’s pick is the Hindi web series It Happened in Calcutta The series is available on Alt Balaji, and let’s see how it is.

The series is based in Calcutta way back in the year 1962. Kusum Ganguly(Naghma Rizwan) joins the MBBS course in a reputed medical college. On the other hand, Ronobir Chatterjee (Karan Kundra) tries to woo her but she rejects him. As time passes by, Kusum falls for Ronovir but being a flirt, Ronobir cheats her and leaves her heartbroken. They once again meet in the year 1971 amidst the backdrop of Indo-Pak. The rest of the story is as to how the couple rekindles their love in these troubled times in Calcutta.

TV Heartthrob, Karan Kundra plays the main lead and does a solid job. His look, performance, and dialogue delivery are superb and create an adorable impact on the series. But it is the female debutante Nagma Rizwan who wins the cake as Kusum. The whole show is based on her and the young girl does so well in her role. The basic setting in which the love story is placed looks endearing. The production values and camera work are top-notch as the show has come beautiful visuals. Some college episodes in the initial part of the web series have been designed quite well.

The show is based in 1969 but the makers have taken way too many cinematic liberties. There are few scenes like kissing in pubic, talking openly about sex, and various other issues, which was not at all the part of the culture then. Just to make things engaging, the makers have added glitz which could have ben avoided. The story is also quite routine and nothing new.

Overall, It Happened in Calcutta is a web series that has a good setting and solid performances. But as the backdrop is old, the narration should have been realistic which is not the case. A lot of glitz and glamor are added just to make things entertaining and that is where things go down. If you are the ones who love period love stories, give it a shot but there is nothing special in it to rave about.