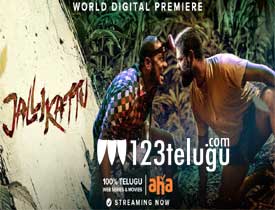 So, continuing the series of reviewing movies and shows during the lockdown period, our today’s pick is the Telugu dubbed version of the critically acclaimed Jallikattu. The film is available on AHA and let’s see how it is.

The film is based in the forest town of Kerala. Vincent(Chemban Vinod) is a butcher who sells beef in this town. Everyone loves meat and even though they are poor, the villagers manage to buy meat from Vincent on a daily basis. But one fine day, the buffalo which Vincent readies to slaughter escapes somehow and creates a lot of trouble. The rest of the story is as to how various groups in the village try to nab this buffalo and become a hero.

The real forest locations and rooted politics of the village look good. The subplots of various people trying to nab the buffalo have been established well. There is one scene where the buffalo attacks a bank and goes haywire. This scene has solid thrills and lifts the film. Also, the gripping background score elevates the proceedings well.

The start-up to the main story and how the plot is unleashed looks good. Even though the film is experimental, it has decent thrills. The camera work is stunning and the production design is amazing.

After having a solid start, the film slows down a bit as many subplots are showcased. Even though they look good, they distract the proceedings a bit. Also, there are many characters in the film and they are not introduced well which leads to a bit of confusion for the normal audience.

After a point, the story does not move and the villagers just keep searching for the buffalo. So many such scenes are showcased way too much in the film which is a letdown. The climax is also rushed and not explained well raising doubts. Also, the scene where the villagers nab the buffalo has also been exaggerated a bit.
Final Verdict :

On the whole, Jallikattu is a film that has a very unique and interesting premise. The realistic nature of the film and rustic performances are basic highlights. The film has a crisp runtime and is gripping for the most part. This is not a regular film and is based in a small town. If you ignore the repetitive scenes and slightly exaggerated climax, this film ends as a passable watch this weekend.