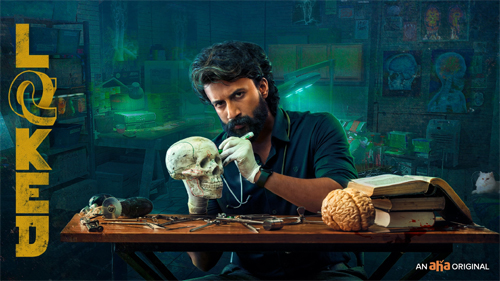 So, continuing the series of reviewing movies and shows during the lockdown period, our today’s pick is the Telugu web series Locked starring Satya Dev. The series is available on AHA and let’s see how it is.

Dr. Anand(Satyadev) is a neurosurgeon who is quite popular for his way of handling patients. He is also doing special research in the field of medical science and for this, he chooses a unique route. One fine day, he is suddenly attacked by two ladies at his home. Things become even more chaotic when his colleague Misbah and a cop enter the house. A series of crazy events take place and a startling truth about Anand is revealed. What is that truth and how it affects the others in the house forms the story of locked.

Firstly, what impresses you is the mood of the web series. Credit should go to director Pradeep Deva Kumar who has an eye for detail. He creates a gripping atmosphere for the show which makes things very interesting. He does not beat around the bush and showcases things in a most rustic manner which is the best part of the show.

Coming to Satyadev, he is in form and is amazing as the crazy neurosurgeon. Right from his expressions to his body language, Satyadev is terrific and the way he showcased the negative streak with his eyes and expression was too good. It was really good to see veteran actress Lakshmi in a good role after a long time. Her track of robbery is quite good and nicely gels with the story.

The production design needs a special mention as the medical setup which showcases surgery and other serious stuff is nicely managed. The camerawork is top-notch and creates gripping visuals. The way the ending is created is also impressive. The manner in which all the characters enter the story and how the hero deals with them looks good. Logical issues are handled well.

The research of Satyadev and why he is behaving in such a manner should have been showcased in a more detailed manner. Also, Satyadev’s backstory and the way it is showcased look dull. The screenplay during the initial episodes is a bit dull and it takes a bit of time for normal people to understand what is going on. The screenplay moves back and forth which is not that clear in the initial part.

On the whole, Locked is a web series that has a very gripping premise. Satyadeva’s crazy performance, the dark nature of the show, and intriguing characters make things engaging for the thriller genre lovers. Though the start is a bit sluggish and the screenplay is dull, once the series enters the main story, it looks gripping and makes up for a decent watch.