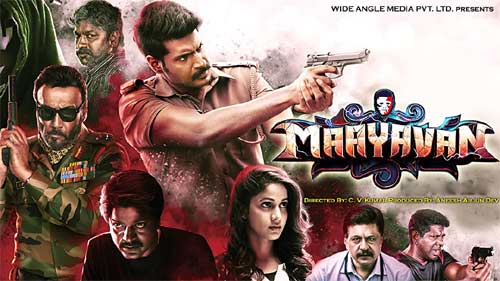 So, continuing the series of reviewing movies and shows during the lockdown period, our today’s pick is the 2017 Tamil film Maayavan. Directed by C V Kumar, this film is available on Amazon Prime.

Inspector Kumaran(Sundeep Kishan) starts investigating a petty case which leads to cold-blooded murder. In the process to chase the criminal, he gets severely injured. Once he recovers, Kumaran and his team witness the same pattern of crimes in the city with a small clue. The rest of the story is as to how Kumaran cracks this case and nabs the culprit.

Sundeep Kishan as a cop is top-notch. He does a good job and is best with his aggressive expressions. The way he goes about his role and keeps the proceedings gripping with his superb dialogue delivery and a special tone is very good. The crime angle has been narrated well in the film.

The whole suspense atmosphere is maintained well until the end of the film. Daniel Balaji is also apt in his role. The story is superb as the way crime thriller is mixed with science fiction looks good. Lavanya is adorable in her role but does not have much screen presence. The second half in particular is pretty racy till the end.

Overall, Maayavan is a well-made thriller that has some racy narration, especially in the second half. Sundeep Kishan’s aggressive performance, great setup and suspenseful scenes keep you hooked. Barring the slightly slow first half, this film is a decent watch during this lockdown. Give it shot and you will like it for sure.