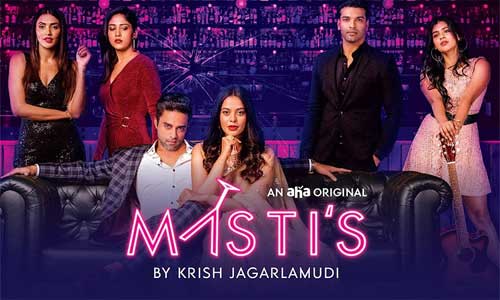 So, continuing the series of reviewing movies and shows during the lockdown period, our today’s pick is the Telugu web series Mastis. The series is available on AHA now and let’s see how it is.

The series is set in a resto lounge bar called Mastis which is owned by a rich Ad filmmaker Pranav(Navdeep) and his wife Gowri(Bindu Madhavi). On the other hand, the manager of the restaurant, Anand(Raja) is in deep love with one of the waitresses Lekha(Chandni Chowdary). Then, there is Tanya(Hebah Patel) who is trying hard to make it big with her band by performing at Mastis. In all this, the twist arises when Pranav starts cheating his wife by maintaining multiple relationships and one of them is a model named Simran(Akshara Gowda). The series deals with all the cooked relationships and how they are sorted out in the end.

The series has been written by star director Krish and his script lays a good foundation. Krish gives all his characters equal importance and sets very good emotions for them. All the key characters are nicely connected and showcase today’s culture in urban cities. Navdeep is now an experienced actor and he does superbly in his role. Navdeep shows his bad and good side and balances his act well. Bindu Madhavi gets a good scope to perform and she is good.

Young actor, Raja is the best part of the show as he showcases subtle emotions and breakup issues supremely well. His dialogue delivery and acting prowess have nicely been tapped by director Ajay Bhuyan. Hebah Patel is also decent in her given role. Chandni Chodwary is very good as Lekha and does quite well in all her emotional scenes. Akshara Gowda is perfect as the model and does a great job in her negative role.

The production values of the series are top-notch. Be it the camerawork, taking, set design, or the costumes, the show looks ultra-posh. The usage of old songs that play through a band in the narrative has been thought of well. The emotional thread and how each of the crooked relationships is ended has been executed perfectly. Director Ajay Bhuyan gets good credit for keeping the soul of the script intact and narrated the series interestingly.

The series is inspired by several Hindi and English shows as the plots and twists in relationships look similar in certain areas. Also, there is much usage of cuss words which was not that needed. The show is a bit bold and speaks about affairs and two-timing which might not go well with a section of the audience.

Overall, Mastis is a series that depicts how relationships work in the posh urban areas. The setup, performances, production values, and emotions work quite well. One might have seen such stories in Hindi and English but Krish and his team have nicely set it up in Telugu with good narration and crisp runtime for each episode making this an interesting watch during this lockdown period. Go for it.