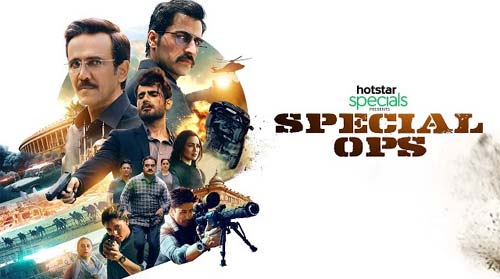 So, continuing the series of reviewing movies and shows during the lockdown period, our today’s pick is the Hindi web series Special OPS. The show is available on Disney-Hotstar and let’s see how it is.

Himmat Singh(KK Menon) is a RAW officer who feels that there is a sixth terrorist behind the Indian parliament attacks that happened in 2001. All the five were killed but Himmat feels that there is a sixth person and for this, he forms a team of five who are undercover all over the world to track this attack. The series is an espionage thriller based on the Indian government’s acts to catch this terrorist and how all this unravels is the basic story of this web series.

KK Menon is a terrific actor and he proves it once again with this series as he is amazing as the RAW office who masterminds the search operations. The series is co-written by star director Neeraj Pandey and he sets the story well in various countries. The initial episode is good as it shows how the governments deal with such situations. The last three episodes are quite racy and have the needed twists of an espionage thriller.

The way secret agents live their life and how they go to any extent for the country has been showcased well. The production values of the show are top-notch and create a good watching experience. Karan Tacker does a fine job as agent Farooq and looks dashing throughout the series. The detailing gone into this thriller is quite good

After an interesting first episode, the story dips in the next three episodes. Too much time is wasted in the backstories of KK Menon which has no connection to the story at all. The story is dragged to no extent and many logical errors keep erupting in. The chemistry between Karan Tacker and Sana just buzzes out and doesn’t appeal much to the viewers.

The transition between the past and present isn’t swift enough as the screenplay is not that gripping. Neeraj Pandey, who is a master with thriller does not get it completely right with his writing here as it has many loopholes.

Overall, Special OPS is an espionage thriller from the production of noted director Neeraj Pandey. His story has a decent premise and good performances but the dull narration in the middle episodes keeps you bored. If you sit through this, the last three episodes are quite gripping and have good twists and still make up a decent watch.