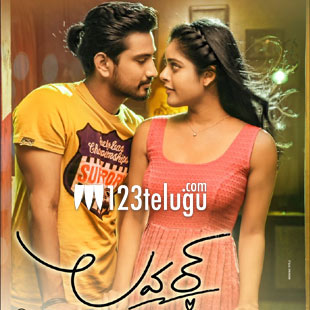 Raj Tharun, who is going through a series of flops has come up with his new film Lover. Produced by Dil Raju, this film has hit the screens today. Let’s see how it is.

Raj(Raj Tarun) falls in love with a nurse by the name Charitha(Riddhi Kumar). At first, Charita does not oblige Raj’s love but the moment she does, she falls in serious trouble which involves her hospital and Raj Tarun’s elder brother(Rajeev Kanakala). Well, what is the twist behind all this and how does Raj save his lover is the whole story of the film.

Raj Tharun looks good with his new makeover. The way he balanced the romantic part in the first half and carried the massy avatar during the later part is good. Debutante Riddhi Kumar is a superb find and she is apt as the Malayali nurse. Performance wise too, she is quite impressive and evokes good emotions.

Rajeev Kanakala adds a lot of depth to the film with his impressive screen presence. The way he showcased superb emotions in the later half is impressive and it will be interesting to see how he chooses his roles from now on as a senior character actor.

Songs are the biggest asset of the film as all the numbers are superb and have also been shot well. Subbaraj and Ajay do their negative parts well.

The last twenty minutes is where the movie goes for a toss. A serious mafia set up who is after a rare blood group is showcased from the start but when the time comes for real action during the climax, Raj Tharun fools them as the film is wrapped up in a hurry. This looks a bit over the top.

Also, more comedy and better romance should been added in the first half to make things tighter. The main villain, Sachin Khedekar is completely wasted in his role and does not have even a single lengthy dialogue.

If you take out the good songs from the film, the movie does not generate much interest. A very good episode and song is followed by some silly scenes and this where the film gets tedious for the audience.

Production values by Dil Raju’s nephew, Harshith Reddy, are top notch as he has not compromised on the visuals and music part of the film as they are the main assets. Editing is decent and so was the camera work. Five music directors have worked on the musical score and they have done a superb job.

Coming to the director Anish Krishna, he has done just an okay job with the film. His story is routine but the treatment is fresh first ten minutes of second half where the film shifts to Kerala. But the way Anish ends the film and makes the last fifteen minutes boring and silly disappoints the audience to an extent.

On the whole, Lover is surely a better film when compared to Raj Tarun’s previous duds. The movie has amazing songs and decent first half. But the second half gets jittery and is ended in a hurry. If you are okay with the routine plot and do not mind the simple proceedings, give the film a shot which ends as a time pass watch this weekend.