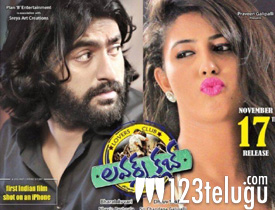 Lovers Club is the first Telugu film that has been exclusively shot by on iPhone 6s. Directed by Druva Shekar, this film has hit the screens today. Let’s see how it is.

Rishi Bharadwaj, who is highly inspired by his dad, sets up an organization called ‘Lover Club’ to help the genuine lovers in the society. When everything seems to be going well, one video call from a person called Raju regarding his love life pushes Rishi to take up a new challenge. Who is this Raju? what is his backstory? How will Rishi overcome all problems and help Raju? To know this, you have to watch the film in theaters.

One aspect which instantly impresses the audience about the film is the way it was shot on iPhone. The entire unit has really worked hard to shoot the film which we can see in the end rolling titles.

Coming to Rishi, he is good looking and gave a decent performance as an aggressive person. Looks wise, the girl who acted as Rishi’s love interest is also good.

The young couple who played crucial roles of Raju and Rani are good in their respective characters. Especially, the girl who acted as Rani impresses the audience with her typical Telangana slang.

The major drawback of the film is its age-old story line. Though the thought of establishing an organization for needful lovers is good, it lacks proper depth and interesting narration.

Yet another drawback of the film is that the makers have failed in promoting the film aggressively as the first Telugu movie shot on iPhone which could have surely gained the audience attention.

The first half of the film has a decent narration but lacks entertainment which is most important for such genre films. The second half of the film takes off on a serious note but the director failed to maintain the same momentum throughout. One song which comes during the climax has no purpose at all.

Director Druva Shekar should be appreciated for his innovative thought of shooting a feature film on iPhone. But what fails with Lovers Club is its narration. The cinematographer has done a commendable job in handling the camera work which looks on par with a regular camera.

Editing work is okay. Music is decent as the background score carries the mood of the film to an extent. Production values are okay for this low budget entertainer.

On the whole, Lovers Club has the same age-old story line which may not appeal to the audience. Though the efforts that the team has put in to shoot the film on iPhone is appreciable, the normal proceedings and flat narration are a major drawback. Those who are eager to watch how a feature film was shot on iPhone can try Lovers Club, but others can ignore it this week.