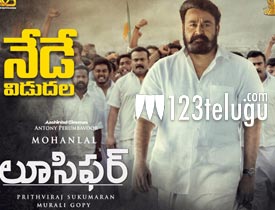 Lucifer is one Mohan Lal film which has created a sensation of sorts in Kerala. Now, the film directed by actor Prithvi Raj has been dubbed in Telugu. Let’s see how it is.

The film starts with the death of CM PKR(Sachin Kherdekar). Things get ugly as there is a lot of chaos as to who should become the next CM. Stephen(Mohan Lal) is CM’s close associate and gets assigned the duty of safeguarding CM’s daughter Priya(Manju Warrier). But Stephen has a serious enemy in the form of Priya’s second husband(Vivek Oberoi). To know who will become the next CM and how Stephen safeguards Priya, you need to watch the film on the big screen.

Mohan Lal leads from the front and carries the film on his shoulders. The way he portrays his loyal role and showcases superb emotions in the climax speaks volumes of Mohan Lal’s acting prowess. The basic political theme of the film is very impressive.

Manju Warrier in the role of CM’s daughter is quite impressive. She is an experienced actress and her role brings a lot of depth to the film. Vivek Oberoi is superb in the role of a bad guy. The way his transformation from good to bad in front of his wife has been showcased quite well.

Though Prithvi Raj chose a good story, his narration is a bit slow. He showcased Mohan Lal in a superb manner and wins the hearts of his fans but for others, the narration looks jaded in many areas.

The film had good scope for more drama but the director missed out on it and added unnecessary scenes in both the halves. Certain crucial emotions in the second half have not been elevated well. There is heavy Malayalam flavor in the film and this will be a concern for the Telugu audience.

Music by Deepak Dev is decent but his BGM was amazing in all the political scenes and those which elevate Mohan Lal’s heroism. Camerawork by Sujeeth Vasudev is superb and showcases the political atmosphere in a riveting manner. Editing is decent and so were the production values. Dubbing work is also good.

Coming to the actor turned director Prithvi Raj, he has done just an okay job with the film. His story idea is impressive but his narration in key areas was jaded and the screenplay was haywire though he showcased Mohan Lal in a superb manner.

On the whole, Lucifer is a passable political drama which has some hiccups here and there. The theme of the film and performances are top notch but the narration and pace are a bit slow in places. Also, the heavy Malayalam flavor might not go well with the Telugu audience. This is a serious movie and all those who like political dramas with good star cast will like the film. But for others, it is just a below average watch this weekend.