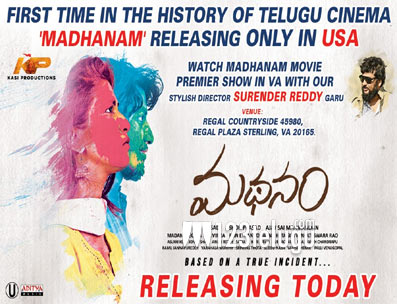 Madhanam is the only Telugu film which saw its release in the US. A special show was aired for the press and here is the review of the film.

Ram (Srinivas Sai) has a messed up childhood and does not come out of his room for 14 years. He makes a special exception after he sees a girl called Suji (Bhavana Rao). Slowly, his friendship with her turns into love. Just before he decides to propose to her, Suji reveals her love for Ram. But to everyone’s shock, Ram disapproves of her relation and runs away from Suji. Why did he run away from her? Why is he not happy with the proposal? To know the answer, you have to watch the film on the big screen.

The concept of the film looks good on paper but the execution has its own issues. More on that later. The camerawork of the film is too good as the love story has a very feel good and close to reality feel. The locations chosen, camera work is very good and credit should go to the makers for giving the film a different look altogether.

Hero Srinivasa Sai is perfect in his role as a complexed youngster. He did a good job in all his crucial and emotional scenes with his mother and heroine. But the star of the film is the heroine Bhavan Arora. She has a very good screen presence and looks beautiful. The way she performed her role was lively and the young actress surely has a bright future ahead. She was quite impressive in the film.

Senior actress Sithara got a good role and was very emotional in all her scenes. The way she carried her emotional problems through her expressions was pretty good. The second half of the film is a bit interesting with the proceedings having some basic sense. Ajay Ghosh was good at his role as a comedy villain.

One of the biggest drawbacks of the film is that it defies logic in many areas. There are many issues and scenes which are not explained well. The young hero does not come out of his house for 14 years and his mother makes basic efforts to bring him out. This looks a bit over the top.

Also, the pace of the film is horribly slow. The first half is dull and does not have anything going its way. Any love story needs to blossom and to show this, there need to be good scenes and romance. But all that is missing in the film.

The hero loving the heroine is shown well but for what reason the heroine falls for him should have been shown in a very interesting and youthful manner. The proceedings are predictable after a while and the film does not create any curiosity and becomes dull.

Music by Ron Ethan Yohann is superb as the songs and background score are very impressive. The cinematography by PG Vinda is neat and is the best part of the film. Dialogues are good and so was the production design. Editing is just about ok. Coming to the director Ajay Sai, his concept on paper was okay but his execution is below par. There is no spice in the narration as the film has a depressing feeling. He did not add any chemistry between the lead pair and that is where the film goes down. The suspense element is good but it is not narrated convincingly.

On the whole, Madhanam is a film that has a decent premise and interesting concept. But the execution is quite dull and has not much spice in it. Also, the pace of the film is very slow and makes the proceedings routine and predictable. Except for the taking and production values, this love story is very dull and ends up as a tedious watch.