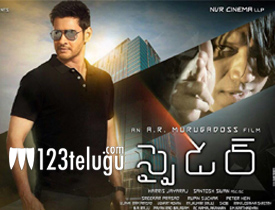 Superstar Mahesh Babu and A R Murugadoss’s much-awaited spy thriller, SPYder has hit the screens worldwide today. Let’s see how it is.

Shiva(Mahesh Babu) is a phone tapping agent in the Information Bureau who is keen on solving public issues. When everything seems to be going fine with his job, Mahesh comes across two mysterious deaths and takes up the challenge of finding the person behind it. Who is this serial killer? Why is he committing all these crimes? and How does Shiva nab him at the end is the rest of the story.

Undoubtedly, Mahesh is the biggest asset for the film. His screen presence and intense acting will impress the audience completely. Mahesh’s dedication and determination are clearly visible on screen through his fights and performance. He has carried the entire film on his shoulders.

Coming to SJ Surya, he will definitely stun the audience with his brilliant performance as a sadist. He is so perfect for the role and leaves you quite impressed. All his confrontation scenes with Mahesh have been executed quite well. The first half is pretty good and has some very interesting racy moments.

Yet another major highlight of the film is an intriguing long episode in the second half where ladies nab Surya. Intelligent and fast-paced narration in this particular sequence will thrill the audience. The background score of the film is pretty impressive and elevates the film decently.

The film takes its own sweet time to enter into the main story which is one of the drawbacks. The three songs which come in the first half are like speed breakers for the film. Also, the costumes designed for Mahesh in these songs are below average.

Rakul Preet looks tired and jaded as her makeup and performance are not up to the mark. She is hardly seen in two or three scenes in the second half. Even though SJ Surya’s childhood scenes are good, there is a lot of Tamil flavor which may not appeal to Telugu audience.

Too many cinematic liberties have been taken in Spyder. The technology used looks a bit over the top and is too much in support of the hero. Certain logics like how Surya escapes from jail and plants bombs all over have been missed completely.

Editing work by A Sreekar Prasad is good. Cinematography by top-notch technician Santosh Sivan is okay. Music by Harris Jayraj is below par. Production Values for this high budget entertainer are very rich and on high standards. The graphics used, especially for the rock episode looks below par.

Coming to the director Murugadoss, he has done a decent job with the film. Even though he has picked up a routine story, the way he has narrated it clicks with Spyder. He adds good racy elements during the first half but slightly dips in his execution during the later part. Had he made the film crisp and decreased the runtime a bit, the effect would have been even better.

On the whole, Spyder is a decent action thriller which has some very interesting moments. Mahesh Babu’s rocking performance and Surya’s menacing act will surely impress you. But as the film has a routine and serious storyline, the class audience will lap it up but the mass audience might find it a bit difficult to digest. Also, the climax is weak and hurried up. If you are okay with the above-said things, then Spyder will entertain you this weekend.