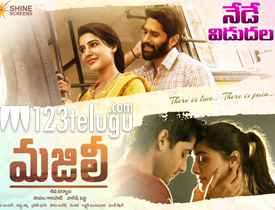 Majili is one film which was being awaited all over since a very long time. The film has finally hit the screens today and let’s see how the film turns out to be.

Poorna(Chay) is a happy go lucky youth in Vizag who falls in love with Anju(Divyansha Kaushik) a rich naval officer’s daughter. As time passes by, Poorna’s local politics create a rift in the love story and breaks the couple apart.

Moving ahead, Poorna marries Shravani(Samantha) but is still in the hangover of Anju and keeps Shravani away. How will the problems between the couple get resolved? What is that factor which changes everything? To know the answers, you need to watch the film on the big screen.

To start things first, Majili is filled with some memorable performances which elevate the film nicely. Chay Akkineni is a revelation as he gives his career best performance. With this film, Chay proves that he is a director’s actor who molds himself according to the character. The way he showcases the pain with his serious emotions is the best part of the film. Chay is superlative and impresses you from the first scene itself.

Samantha once again proves that it is not the length of the role but the depth of it to leave an impression. She, as Shravani, takes the film to another level in the second half. Be it her body language, dressing sense and sacrificing behavior, Sam showcases it all and wins many hearts.

The second half is where the real action happens as superb family emotions take center stage. Even though Sam and Chay do not have many dialogues, the manner in which they carry the pain is showcased in a superb manner. Suhas, the new actor who played Chay’s friend is impressive.

Debutante Divyansha Kaushik is impressive for her first film and has a good role in the first part. The supporting characters are quite strong. Rao Ramesh as Chay’s dad brings a lot of depth to the film. Posani was apt as Sam’s impatient dad.

Even though the film has many feel good moments, the story is old and predictable. There is nothing novel and has a hangover of several Hindi films in the past.

Yet another drawback is that the film is painfully slow at times and can get on the nerves for those who look for sheer entertainment. Director Shiva takes his own time to build the story in the first half and because of this the film starts on a slow note as way too many cricket scenes are showcased.

Production values of the film are top notch as the film showcases both the time zones in a superb manner. Music by Gopi Sundar is just about okay as some more hit songs could have made things better. But Thaman breathes life into the film with his BGM which is very good. Lyrics are meaningful and so were the dialogues which showcase the middle class set up well. Chay has been styled well as the different age groups he plays have been showcased quite nicely.

Coming to the director Shiva Nirvana, he has once again showcased a mature love story impressively. Though the story seems old, his adaptation and setting it in a middle class set family is very good. He extracts superb emotions from the lead actors and makes them portray their realistic characters with ease. There are many scenes which will connect with youth, women, and parents which Shiva has presented well.

Premam was a career-changing film for Chay and Majili will do the same as it will take him one step higher in his career. Samantha ably supports Chay with her lovable portrayal and they as a couple, make Majili work in the second half. The film will be liked by the family audience and youth as both the halves have been set according to their sensibilities. If you ignore the predictable nature of the script and bear the slow pace, the roller coaster of emotions will surely make you enjoy this film comfortably. Go watch it.