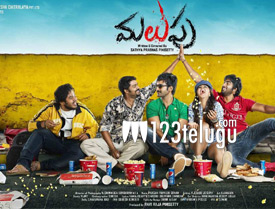 Continuing with the trend of dubbing films, yet another dubbed Tamil film which has released today is Malupu. Starring the talented Aadi Pinisetty as the main lead, this film is directed by his brother Satya Prakash. Let’s see how it is.

The story is about Saga(Aadi) and his three close friends who get into a tiff with a girl named Priya(Richa) and her boyfriend during the new year’s eve of 2014. As time passes by, all the friends in the group suddenly start getting threats from a Mumbai based don(Mithun Chakravarthy) and his gang.

Shocked by this outcome, Saga decides to apologize to the don on behalf of his friends. Upon landing in Mumbai, he finds out that the don is actually looking out for him with a solid reason.

Who is this don ? What does he have to do with Priya ? and Why is he after Saga’s life. That forms the rest of the story.

Suspense of the film is very good and the way these elements have been unleashed during the second half is brilliant. The director manages to narrate the film with a lot of thrills and elevates the proceedings during this time.

One of the biggest assets of the film is Aadi’s performance. The way he has showcased his all round skills is just amazing he has single handedly carried the film on his shoulders.

All the scenes showcased on the friends group and the romance between Aadi and Nikki has also been executed well. Mithun Chakravarthy is superb as the Mumbai don and brings a lot of depth to the film.

Length of the film is a tad too long. As the main story kicks off during the second half only, the first half is slightly dull and does not have many entertaining moments. Pace of the film is also very slow during this time as the story wanders here and there.

Climax of the film is a huge let down. After showcasing the suspense elements in such a good manner, the makers have opted for an unconventional climax which looks over the top and does not convince the audience. Songs of the movie also cause a disturbance to the flow of the film.

Camera work by Shanmuga Sundaram is pretty good and showcases the different moods of the film very nicely. The way he has shot the suspense elements is very impressive. Editing is decent and so were the dubbed Telugu dialogues and production values.

Coming to the director Satya Prabhas, he has done an okay job with his debut film. The way he has added enough suspense elements during the second half and narrated the film is quite decent. If he had taken care of the below par first half and ended the film on a convincing note, the output would have been even more.

On the whole, Malupu is a decent suspense thriller with enough twists and turns. If you manage to sit through the below par first half and forget the unconvincing climax, you can easily give this film a shot for some interesting and thrilling moments.