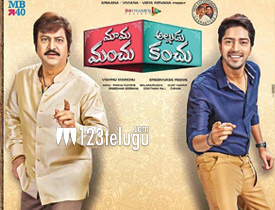 Mohan Babu and Allari Naresh have teamed up for a family entertainer tilted Mama Manchu Alludu Kanchu. The film has hit the screens all over today and let’s now see how it turns out to be.

The film kick starts with Bakthavatsalam Naidu(Mohan Babu) shuttling his life between his two wives Ramya Krishna and Meena. Twist in the tale arises when his daughter(Poorna) mistakenly gets attracted towards his other wife’s son(Varun Sandesh).

To avoid this crazy situation, Naidu hires Balraju(Allari Naresh) to deviate his daughter’s attention. To his bad luck, Balraju falls in love with his daughter causing even more problems to Naidu. Rest of the story is as to how Naidu manages the troublesome Balraju and solves all his pending martial problems.

Undoubtedly, Mohan Babu is the heart and soul of Mama Manchu Alludu Kanchu. Even at this age, Mohan Babu looks fresh and carries his role with utmost sincerity. It is only because of Mohan Babu the proceedings get lively and it was a treat to watch him in such an entertaining role after a long time.

Allari Naresh is pretty decent in his role and performs to the best of his capabilities. Ali gets a full length role and does a decent job. All his scenes with Mohan Babu have come out nicely.

Mama Manchu Alludu Kanchu suffers with the problem of age old story line. The script idea is pretty ordinary as the film has the feel of the 90’s. Allari Naresh looks out of place as his character has not much weight in the film.

After a point, the films gets quite predictable and the pace also drops a bit. The mistaken identities and all the drama which is caused because of this could have been showcased in a innovative way. Climax of the film is wrapped up in a silly manner.

Production values of the film are top notch and showcase the film in a rich light. Camera work is good and so was the art direction. Editing is ok but a few scenes during the second part could have been chopped off. Coming to the director Srinivasa Reddy, he has done a below par job with his direction. His subject had huge scope for comedy but he failed in setting the film in contemporary mode and makes the film look old school.

On the whole, Mama Manchu Alludu Kanchu brings back Mohan Babu in an hilarious role after a long time. His comical performance and some comedy punches are basic assets of this film. On the flip side, the film’s outdated story line will not go well with today’s generation but will go well with family audience.