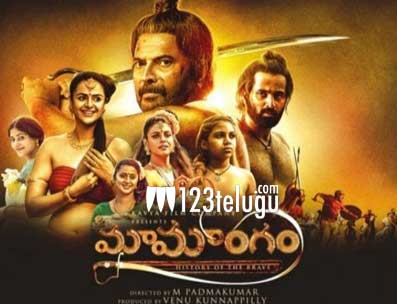 Mamangam is a Malayalam film that has been promoted a lot in the last few days. The dubbed version has hit the screens today and let’s see how it is.

The film is on the medieval Mamankam festival celebrated during the 17th century on the banks of the Bharathappuzha in Kerala. For years, the warriors known as Chaaverukal plot against the Zamorin rulers to overthrow them. Chandroth(Unni Mukundan) takes a lead and comes forward from this dynasty to kill the Zamorin ruler and he is accompanied by a young boy. The twist in the arises when Chandroth comes across a man named Chaver(Mammootty) who is in disguise. Who is this guy? What does he have to do with the whole fight? Will Chandroth be able to kill the king? To know the answers, you need to watch the film on the big screen.

The film has a good setup and great production values. The camerawork is superb and the amazing BGM takes the film a notch higher. The film is more of a dialogue drama than fights and dance. There are two major fights, one at the beginning and end. They have been composed quite well and Mammotty is showcased superbly.

The second half of the film is a tad better when compared to the first half. The costumes of the film are very good and the lush visuals give a lot of depth to the film. Mammooty does not have much screen presence but when he is around things look good. Even at this age, he has done all the fights well in the film. Unni Mukundam of Bhaagmathie fame is very good in his role and speaks a lot through his eyes.

Firstly, the film has a heavy-duty Malayalam flavor which is hard to digest for the Telugu audience. Moreover, the story moves at a snail’s pace in both the halves and can get on to your nerves. The emotions in the first half do not work one bit. Also, the story is quite confusing and one cannot understand what is going on until the first 20 minutes.

For those who think Mammootty will be there throughout the film, they will be disappointed. He was like a guest character as he appears only during the start of the first half. In the second half, he is there most of the time but does not create any impact. There is a simple twist and that too is showcased in a very boring manner.

The story is simple and is based on killing the king but the makers have created so many unnecessary scenes that one gets so bored and irritated. The climax is also not that impressive and it ended in a jiffy.

Technically, all Malayalam films are brilliant and the same is the case with this film too. The camerawork by Manoj Pillai is superb as the ancient visuals and color tone of the film are just superb. The Telugu dubbing is also quite good. Lyrics are decent and the best part was the BGM by Sanchit and Ankit Balhara was too good. Coming to the director Padma Kumar, he did a below-par job with the film. He has made it with the Malayalm audience in mind and played it according to their sensibilities and culture. But his narration is dead slow.

On the whole, Mamangam is a historical costume drama that is slow and boring. For the Malayalam audience, there is plenty to connect to as it showcases their culture. The plot is okay and so are the performances but the dull narration and lack of good engaging moments make this film a tedious watch for the Telugu audience.
123telugu.com Rating : 2.25/5