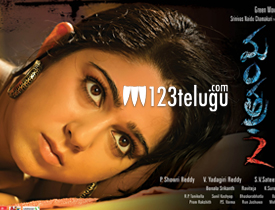 Mantra gave a huge boost to Charme’s career. Year’s later, the talented actress is back with its sequel Mantra 2. Also starring Chetan Cheenu, this film has hit the screens today. Let’s see how it is.

Mantra(Charmi) gets a job in Hyderabad and shifts to the city. There, she lives as a paying guest with an old couple and leads a very happy life. Things get worse when some unidentified goons try to kill Mantra in her house. An upset Mantra takes the help of her college friend and police officer(Chetana Cheenu) to nab the criminals.

An investigation kick starts and the police team along with Mantra reach the place where she lives. As soon as they reach there, everyone gets a huge shock. What is that shock ? What actually happened there ? Who is Mantra ? and why is she facing all these troubles ? To know answers to these questions, you need to watch the film on the big screen.

Charme has given a honest performance and is the sole attraction of Mantra 2. The entire movie is weaved around Charmi and her expressions during the climax are quite good. Tannikella Bharani is perfect in his role and brings a lot of depth to the film.

Mantra 2 definitely does not live up to its expectations and is such a spoiler of its brand name. Neither does the story nor its narration has any depth as the film wanders with no direction. There is absolutely no story in the first half as the proceedings get tedious and lengthy.

Story of the film is only revealed during the second half and the scenes which depict the horror elements lack clarity. The deaths that are showcased do not create any thrill or suspense. Even though Mantra 2 is a suspense thriller, you can exactly know what is going happen next. The predictable nature of the film gets to you at a point and the proceedings clearly showcase Charmi’s disinterest in the film.

After the initial first ten minutes, the film goes off track and unnecessary commercial elements take centre stage. Venu Madhav’s character, the entire office set up look stupid and have been exaggerated. So many logics go missing in the film as a number of factors are left unanswered.

There is only one song which has been shot well. Camera work is decent as the locations and the house set up has been utilized wonderfully. Screenplay of the film is a big let down as scenes during the climax and pre-interval have not been intercepted well. Editing is below average as a number of scenes in the first half could have been removed.

Background score which is the heart and soul of thrillers is a huge let down. Not even once during the film, you are engrossed in the proceedings. Coming to the director S V Sateesh, he has done a poor job with the script. His narration lacks the punch as the film goes on for ever and ever.

On the whole, Mantra 2 is a huge let down from the successful franchise. Except for Charme’s star appeal, this film has neither the thrills nor the so called interesting suspense elements. A complete disappointment for all those who go in with certain expectations. Ignore it even when it comes on television.