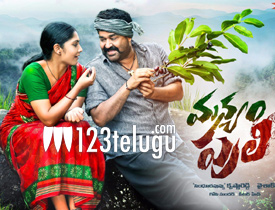 Puli Murugan was one film which was a huge hit in Malayalam. The film has been dubbed as Manyam Puli in Telugu and has hit the screens today. Let’s see whether it manages to impress the Telugu audience or not.

Puliyooru is a small village which falls under a dense and deadly man-eating tiger area. Things often get tensed as many kids and people keep getting killed by the Tigers living around it.

On the other hand, Kumar(Mohan Lal) is the only man in the village who is capable of fighting the Tigers with his deadly skills. As time passes by, Kumar who is also a lorry driver gets engrossed in a drug case and is forced to leave the village which is already in huge danger.

What happens to his village members now ? Will Kumar come back and save them ? What kind of problems does Kumar face in the city? and where does Jagapathi Babu fit in this setup ? That forms the rest of the story.

Action sequences and thrills are the biggest highlights of this flick. There are three terrific sequences involving the Tiger and Mohan Lal which have been designed on a superb note. They are quite thrilling and the background score which comes during this time elevates the film in a stunning way.

Kamaleni Mukherjee does a decent job in her role. Jagapathi Babu is apt in his role and does not have much to do in the film. The first half if pretty decent and maintains a good pace.

As long as the film is set in the forest, it looks quite interesting. The time it moves to the city, it becomes routine and boring. Even though some scenes are good, the entrance of a local don, hero fighting against a conspiracy, everything looks jaded and side tracks the film completely.

Manyam Puli has the effect of a roller coaster. As long as there are fights and heroism episodes, the film looks top notch. The time family drama and some unnecessary scenes come up, you get irritated a bit.

The length of the film also a bit long and there are some fights which could have been toned down. Namitha’s role looks outright silly and cheap and disturbs the film completely.

Manyam Puli has some of the best visuals in the recent times. The forests shown and the way scenes are set in a realistic tone bring a huge depth to the film. Camera work by Shaji Kumar is just amazing and the dense jungle and all the hero elevation scenes have been shown in an awesome way. Half of the film’s credit can easily go to Gopi Sundar and his electrifying background score.

Manyam Puli worked mainly in Malayalam because of some stunning thrills and Mohan Lal’s massy act which is at its peak here. But from the Telugu audience point of view, this film can be only watched for some amazing thrills which are placed at regular intervals. Having said that, one should go in well prepared to bear the rest of the routine drama which lacks nativity and can get you at times.