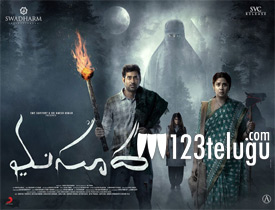 A horror film titled Masooda garnered decent buzz with its promotional material. The movie hit the screens today and let’s see how it is.

Nazia (Bhandhavi Sridhar) and her mother, Neelam (Sangitha), lead a pretty normal middle-class life. They maintain a good relationship with their neighbour Gopi Krishna (Thiruveer) a software employee. When everything is going normal, Nazia starts behaving peculiarly which leaves Neelam and Gopi in utter shock. Gopi tells Neelam that her daughter is possessed and needs the help of exorcists. Did Nazia recover? Why is she behaving that way? Did Neelam and Gopi help her become normal? Watch the film to know the answers.

The makers should be appreciated for staying true to the horror genre without infusing unnecessary comedy. The film didn’t deviate much from its basic plot. Also, the horror story was told in a new manner, and this novelty factor helped the movie to an extent.

The performance of Thiruveer as Gopi is simply brilliant. He, as an innocent young man, is too good. The amount of fun generated through his character evokes nice laughs. There isn’t any comedy track, as stated, but his character was used to derive fun. Sangitha did pretty well as a worried mother, and her performance drives the movie further. Others are good in their given roles.

The film runs on a very slow note most of the time, and especially the first half is a tad slow. The transition from scene to scene is not good in the first half, and a better screenplay would have enhanced the impact.

The love track between Thiruveer and Kavya takes more screen time and isn’t effective. On one side, the interesting horror aspect runs, and whenever the love track comes, the movie becomes a bit boring. This romantic portion also isn’t relevant to the actual plot, and hence these scenes could have been a bit shorter.

One more main drawback is that the movie becomes predictable at times. As the movie runs wholly on a serious note, it might not appeal to all. The length is one aspect which the makers could have taken proper care of. The first half portions especially needed some serious trimming.

As stated above, technical brilliance is found throughout the movie. The background music by Prashanth Vihari creates an eerie atmosphere nicely and intrigues one. The sound effects during the climax portions give a good ending touch to the movie. The cinematography is another asset, as it rightly captures the film’s mood. The production values are awesome.

The editing could have been better. Coming to the debutant director Sai Kiran, he did an okayish job with the movie. His thought to deliver a fine horror movie is good, but his screenplay could have been better to match his vision. Also, having more scary moments in the first half would have made matters better.

On the whole, Masooda works to an extent for its novelty and genuineness. The performances and the technical brilliance give a nice depth to the movie, but the problem lies with the slow pacing and the lag in the first hour. Those who love watching horror films can give it a shot.