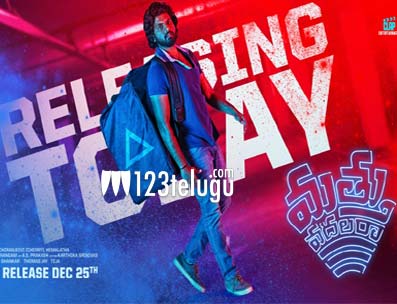 Mathu Vadalara is a film that been promoted a lot in recent times. Directed by Ritesh Rana, this film has hit the screens today. Let’s see how is?.

Babu Mohan (Sri Simha) is a courier boy by profession. Upset by his poor life, he decides to cheat his customers and make money. He targets a special apartment for his loot and right when he manages to rob a lady, she dies on the stop. Who is this lady? Did Babu kill her? Will he be arrested? and how will he come out of this crazy mess is the whole story of the film.

One of the biggest plus points of the film is the director and his taking. Ritesh Rana makes an impressive debut as his way of narrating a simple story line with enough entertainment is good. The suspense in the film has been generated quite well for the most part.

Comedian Satya is the show stealer as it his comedy which keeps engaging the audience throughout the film. The manner in which he speaks those one liners and brings out a differnt kind of comedy in tense moments is just superb.

Vennela Kishore gets an interesting role and he as always gives his own touch to it. Vidyulekha was neat in her comedy and so was Brahmaji. The first half is quite gripping and the manner in which the director showcases a tv serial scenario in tense moments is well thought of.

Last but not least, Sri Simha makes an impressive debut. He looks well trained for his first film and can go a long way if he chooses good concept based films and does not fall for the commercial trap.

The director takes a lot of time to enter the main story. Too many scenes are wasted to establish the hero and his life. Also, once the suspense is revealed, the film becomes predictable.

There are a few logics which go missing in the film. Everything happens in a high profile building but not many are aware of it. This looks a bit over the top.

Production values of the film are neat. Kaala Bhairava makes an impressive debut as the music director. His BGM is quite impressive as sound design is pretty innovative. Dialogues written for Satya are hilarious. Camerawork is really impressive as the color tone used looks cool.

On the whole, Mathu Vadalara is a film that has a decent premise and interesting suspense for the most part. Satya is the real star of the film and his comedy works in a big way. However, the second half goes down a bit and makes things predictable once the twist is revealed. But still the film makes up for a decent watch this weekend for its different narration.