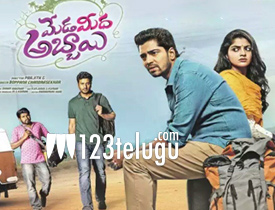 Allari Naresh, who is desperately waiting for a much-needed hit has come up with a film called Meda Meeda Abbayi which has hit the screens today. Let’s see how it is.

Srinu (Allari Naresh) is an ardent movie lover who lands in Hyderabad for his movie trails. During his journey on the train, he comes across Sindhu(Nikhila) and ends up in a selfie moment without her notice. This one selfie lands Srinu in a whole lot of trouble. What problems does this selfie create? Who is this Sindhu? What is her backstory? and how does Srinu come out of his problems? That forms the rest of the story.

One of the major reliefs in the film is that Naresh has completely stayed away from irritating spoof comedy. He sticks to his character and gives a decent performance as an easy going guy. Looks wise, Nikhila Vimal is okay and performs to the best of her capability. The first half of the film has some decent moments here and there.

Jabardasth fame Hyper Adhi’s comedy timing is good as he entertains with his typical one liners. All his scenes with Allari Naresh have been executed quite well. The twist that is revealed before the interval point is quite interesting.

The biggest minus point of the film is its storyline. After watching the film, many might wonder as to how the same concept worked in Malayalam. Though the entire story revolves around heroine’s character, the audience hardly get connected to her.

The film lacks proper depth and purpose. Noted actor, Srinivas Avasarala’s role is yet another letdown in the film and many of his scenes have plenty of cinematic liberties. The way hero falls in trouble because of a stupid selfie looks over the top and hard to believe.

The suspense of the film is maintained a bit too long and in order to do this, Srinivasa Avasarala’s character has been dragged to no extent. There is no proper romance between the lead pair.

Director G. Prajith has come up with a weak storyline and even weaker narration. It is hard to believe that he was the same guy who directed the original with Nivin Pauly. The screenplay of the film runs on a very flat note reminding us of Malayalam films which are quite slow. Editing by Nandamuri Hari is not up to the mark as many unwanted scenes from the last thirty minutes could have been easily chopped off. Cinematography by Kunjuni S. Kumar is poor as the audience gets the feeling of watching a short film. Music by Shaan Rahman is okay.

On the whole, Meda Meeda Abbayi is a below average comedy drama which has some fun here and there. Though Hyper Adhi’s comedy scenes entertain you in parts, they cannot save the film. The unconvincing storyline and a dragged out second half are huge drawbacks. Even though Allari Naresh gives his best and tries hard, the bland narration makes the film disappointing. Watch it only if you have nothing else to do.