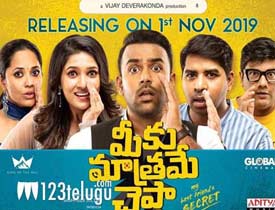 Vijay Devarakonda has turned producer with his maiden production Meeku Maathrame Chepta which has hit the screens today. Lets see how it is.

Rakesh (Tharun Bhaskar) is a TV channel host who is all set to get married to his strict girlfriend. But to his bad luck, a video of him spending some cozy time with an old girlfriend goes viral and makes Rakesh scared to death. The rest of the story is as to how Rakesh goes through hell and gets the video deleted from the source.

The concept of the film is quite novel and it clearly justifies the current generation’s misuse of technology. The way it has been set in the comic background looks good and makes for an interesting script.

But the star of the film is undoubtedly director turned actor Tharun Bhaskar. He impresses in every which way and showcases the character’s helpless situation in a superb manner. Be it his body language or dialogue delivery, everything is perfect and he makes for a good actor.

Abhinav Gomatam gets a meaty role and he evokes decent laughs throughout the film. Anasuya does justice to her tiny role and brings depth to the proceedings. The rest of the supporting cast was also good.

One of the biggest drawbacks of the film is that it does not have that pace which is needed. The lead actor is in tension and is looking to change something which can spoil his life. Such situations should be showcased in a gripping manner with a taut screenplay. But that is missing in the film.

The twists showcased are also very predictable and.nothing novel.The climax has also been wrapped up in a hurry and this gives the film a dull ending.

The film has been made on a very low budget and the production values could have been a lot better. Music is just about okay but the BGM was good. The oneliners have also been written well. Editing is perfect as the film has a crisp runtime. Camera work of the fim is also decent.

Coming to the director Shammir, he has chosen a novel concept but his narration is just about okay. Though he generates good fun here and there, the basic punch in the film is missing. Some more gripping twists and power in the screenplay would have made a lot of difference.

On the whole Meeku Maathrame Chepta is a situational comedy that has a relatable plot and passable fun. However, the narration is a bit dull and proceedings are quite routine. If you ignore the slow pace of the film, the comedy will keep you engaged and makes the film a time pass watch this weekend