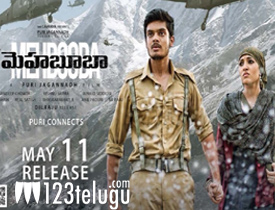 After launching several heroes and heroines into the film world, Puri Jagan is now launching his son Akash Puri as a full-fledged hero with today’s release Mehbooba. Let’s see how the film turns out to be.

Roshan(Akash Puri) is a young man who always dreams of joining the army. This is also the time when a girl called Afreen(Neha Shetty) comes to India for her studies. The young couple crosses each other’s path only to find out that they have been reincarnated from the time of 1971 during the India-Pakistan war and have been separated in some dire circumstances. Rest of the story is as to how the couple solves their problems which have been posted by the animosity between India and Pakistan.

Akash Puri makes a decent effort with Mehbooba. As he has enough experience of facing the screen earlier as a child artist, he looks comfortable in front of the camera. Though he looks a bit young and naive for his part, he has done a decent job in his role. Akash is good in the emotional department and does what is required of him.

On the other hand, Neha Shetty is good in her role as Afreen and shows a lot of promise. She looks good and does well in her complex role. Murali Sharma is good as the heroine’s father. Vishu Reddy, who plays the main villain is a good find and has a good screen presence. His dialogue delivery is neat and if he chooses his roles well, he can go a long way in Tollywood.

The first half of the film has some decent emotions which have been elevated quite well. The interval bang which showcases the reincarnation theme has been set up well. A scene related to India-Pakistan rivalry in the climax where Akash mouths heavy duty dialogues is good.

Yet another irritating factor of the film is that the India-Pakistan rivalry has been dragged too far in the second half. The entire climax happens in the India-Pak border which looks over the top and unnecessary. The film misses a lot of logic as the armed forces and the border-related seriousness is shown in a silly manner.

The second half is where the film falters. Even though Puri’s idea of taking the film to Pakistan looks nice, it has been overused and dragged to no extent. There was absolutely no need of showcasing so much rivalry between two countries. Also, the scenes before the reincarnation do not create any impact whatsoever.

Production values of the film are top notch as Puri Connects have managed to create a good effect of showcasing the army setup which looks quite arresting. The VFX used and the camerawork showcased during the war scenes are very good. Sandeep Chowtha’s music is just about okay as all the songs are showcased in the narrative. The background score is decent as the music scored for the war scenes look good. Editing is bad as at least ten minutes of the second half could have been edited out to make the film crisp.

Coming to the director Puri Jagan, he has done a half-hearted job with the film. Even though his story idea looks good on paper, his execution of the love story is pretty disappointing as it lacks the basic depth. Puri has showcased his son well and has given him a good launch pad to showcase his acting skills, but as a filmmaker, he makes the proceedings silly and drags the film to no extent by showing too much patriotism which was totally unnecessary.

On the whole, Mehbooba is a good story which is let down by some uneven execution. While Akash Puri shows some good prospect, the film as a whole is slow, over the top and has an unappealing love story. Some good production values, decent first half are the only assets and one can give this film a shot only for these said merits. Watch it only if you have absolutely nothing to do as there is nothing new that you have not seen before.