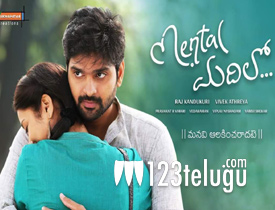 Mental Madhilo is one film which has created a superb buzz off late. The film has Sree Vishnu in a lead role and hit the screens today. Let’s see how it is.

Arvind Krishna(Sree Vishnu) is a confused soul by birth who gets bogged down when he has too many options put in front of him. Fed up with this attitude, his parents decide to get him married. In that process, he meets a girl called Svecha(Nivetha Pethuraj) and gets close to her.

When everything seems to be going well, one fine day, Arvind is forced to leave for Mumbai. There, he meets yet another girl called Renu(Amrutha) and gets attracted to her too. What will a confused Aravind do now? Which girl will he choose? and how will the entire confusion get cleared? To know this, you have to watch the film on the big screen.

One of the biggest assets of the film is the lovable character of Sree Vishnu. You will fall in love with his innocence and the way his role has been conceived in the film. The talented actor is quite impressive in his approach and plays his subdued and confused role quite convincingly.

Nivetha Pethuraj makes a striking debut and has a good screen presence. The way she has enacted her role in the first half brings a lot of depth to the film and gives a pretty breezy effect to the proceedings. The chemistry between Nivetha and Sree Vishnu is crackling as the pair evoke super romance during this time. The second lead, Amrutha also does well in her role.

The makers showcase the first half in such an entertaining manner that the expectation of the audience goes quite high. But the same does not happen during the second half as the second love story is not that gripping.

Even though the proceedings are decent, there is not much kick as too much time is taken to showcase the relationship between the lead pair in the second half. Also, the way the hero realizes his mistake should have been shown a bit clearer.

Prasantha Vihari’s music is impressive as most of the songs come as montages which are good. The background score is quite appealing and gives the film a very feel-good effect. Dialogues are quite witty and have been written with a lot of fun element. Production values of the film are top notch as the characters showed and the entire set up looks quite natural. The screenplay of the film is amazing during the first half but bogs down a bit during the later part.

Coming to the director Vivek Atreya, he has done a pretty impressive job in his debut. His strength lies in the way he narrates the proceedings in a lighter vein. Not one scene looks melodramatic or heavy as the love stories have their own charm. Vivek creates a decent atmosphere throughout the film and makes up for a breezy watch for the audience. Had he dealt the second hall a bit strongly, the output would have been even solid.

On the whole, Mental Madhilo is a very breezy rom-com which has its heart in the right place. The lovable romance, performances by the lead pair and light-hearted family emotions will surely connect with the audience. Even though the film has a predictable and simple storyline, Sree Vishnu’s role makes sure that one gets entertained till the end. The film is clearly not for the masses and will do quite well in the multiplexes making it a very good watch this weekend. Watch it without any confusion.