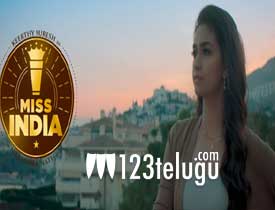 Miss India is a film that has been in the news for a long time as it has Keerthy Suresh in a lead role. Skipping the theatrical release, the film is now out on Netflix. Let’s see how it is.

Manasa Samyukta( Keerthy Suresh) belongs to a middle-class family and dreams of always becoming an entrepreneur right from her childhood. But due to her financial issues, she moves to the US along with her family for a better life. There, she meets Vijay(Naveen Chandra) and starts dating him. Vijay proposes marriage to Manasa but she rejects the proposal and walks out of her home. She then realizes to fulfill her dream and starts a Chai business. There, she locks horns with Kailash Siva Kumar(Jalapathi Babu) who is the number one coffee seller in the US. The rest of the story is as to how Manasa clears all hurdles and brings her Chai brand named Miss India on top.

The story idea of the film is pretty interesting and looks feasible too on paper. Keerthy Suresh gets a meaty role and does her best and carries the film on her shoulders. She looks stylish in a slim get up and rocks the urban look. Jagapathi Babu looks super suave in his negative role and creates a good impact whenever he is on screen.

The confrontation scenes between Keerrhy Suresh and Jagapathi Babu have been handled well. The last half an hour of the film has some interesting scenes. Punitha Ponnada was good in her key role.

Naresh and Rajendra Prasad are efficient in their brief supporting roles. Keerthy Suresh and Naveen Chandra’s track have not much relevance in the story but look decent. Thaman and his music are decent along with the BGM.

As said earlier, the story on paper looks good but the execution of the film is below par. The writing is so weak that most of the actors do not have depth in their characters. The film lacks a basic conflict point. Even though the director sets up good scenes between Keerrhy Suresh and Jagapathi Babu, there is no major conflict between them to fight.

The film is set in the US but not one scene showcases American surroundings. Also, the foreign cast used is cringe-worthy with horrible dubbing. The film lacks basic emotions and takes forever to enter the main story. The family set up, problems, everything looks so artificial.

Also, the biggest drawback of the film is that it is way too long and goes on forever. Keerthy Suresh looks out of place in a few scenes and is confused as there is no depth in the writing for her to perform. The manner in which Keerthy Suresh’s family looks down upon her is over the top.

The camera work of the film is pretty good and showcases the film in a posh manner. As said above, Thaman is the saving grace of the film with his songs and BGM. The dialogues are pretty good and those written for Keerthy and Jagapathi Babu sound good. Keerthy Suresh has been styled quite well in the film. Editing is horrible as the film needs at least twenty minutes to be chopped off.

Coming to the director Narendra, he has a decent story in hand but his inexperience has spoilt the film completely. He takes forever to take the film into the main story. The family scenes he showcases and the bonding between each member looks artificial. There is no strong conflict point in the film. As he wastes too much time to establish the story, when it comes to the main plot of Jagapathi Babu and Keerthy Suresh’s tug of war in business, there is no time and scenes are rushed up and the climax looks absolutely silly.

On the whole, Miss India is a film that has a decent story and set up on paper. But it is the execution that falters. The film lacks basic emotions, engaging conflict points, and upon this, the narration is jaded and has no depth in it. Keerthy Suresh tries hard to hold the film with her grace but weak writing plays a spoilsport and makes this film a boring and silly watch.