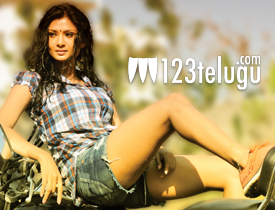 Director Sunil Kumar Reddy has been associated with some hard hitting films in the past. He is back again with yet another message oriented flick titled Miss Leelavathi. This film has hit the screens today and let’s see how it is.

Karthik(Suresh) is a middle class employee who lives happily with his wife. One fine day, he receives a wrong call from a lady called Leela(Ishita Vyas). As time moves on, Karthik slowly gets close to Leela and also shares a physical relationship with her.

Twist in the tale arises when Leela comes to know that Karthik is already married and breaks up with him. An upset Leela now decides to take revenge on Karthik and makes a special plan to ruin his martial life. Will she succeed in her plan ? How does Karthik come out of this deep mess ? That forms the rest of the story.

The message showcased is the major plus point of the film. The makers should be credited for showcasing the problems that people face when they get into extra martial affairs. First half of the film has decent moments and runs on a brisk pace. The way the director has showcased the problems that were caused by the Hudud cyclone is decent.

Newcomer Ishita Vyas does a decent job in her role. The love track between Suresh and Ishita in the first half has been designed quite impressively. Hero Suresh is ok in his role and provides decent support to the film. Some emotional scenes which come in the second half have been dealt well.

Major drawback of the film is the story and narration. This film has a predictable story line and the way it has been narrated is also below par. After a certain point, the director loses control on the script and induces unnecessary scenes into the narration.After executing an interesting interval bang, the movie heads into an unnecessary zone. Same is the case for the pre-climax as the story is deviated from the current plot.

Even though the scenes showcasing the Hudud cyclone have been executed well, the way they have been interlaced into the story is not convincing.Leelavathi’s character also lacks focus. The makers have failed to justify the way she behaves in the film.Her character goes through various emotions which have not been showcased well.

Camerawork in the film is pretty decent and showcases Vizag and Hudud cyclone quite brilliantly. Dialogues written have a lot of depth and are a major plus for the film. Editing is decent and so is the music. Production values are decent and present the film in a decent light. Coming to the director Sunil Kumar Reddy, the subject he has chosen is quite interesting but he falters in his execution. There is no depth in the emotions as the film looses track after the interval.

On the whole, Miss Leelavathi misses the target completely. Heroine’s performance and some engaging moments in the first half are basic plus points. On the flip side, lack of emotional connect and a lack luster second half spoil the flow of the film completely. You can safely avoid the film this weekend.