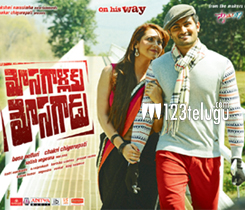 Talented hero Sudheer Babu, is back after a long gap with a crime comedy Mosagallaku Mosagadu. Directed by Nellore Bose, this film has hit the screens today. Let’s see how it is.

Krishh(Sudheer Babu) is a small time crook who cheats others for a living. One fine day, he is assigned a job of stealing a precious idol by Kaushik(Jaya Prakash Reddy) and his gang. Twist in the tale arises when Krishh cons every body and runs away with the idol.

This last minute twists causes a huge loss to Kaushik and his boss(Abhimanyu Singh) who are about to go in for a huge deal with the idols. Why did Krishh steal the idol, and What is the actual story behind all this chaos ? That forms the rest of the story.

Sudheer Babu looks stylish when compared to his previous flicks. His acting has improved a lot as the young hero carries the entire film on his shoulders. Yet another major highlight of the film is the comedy track between Jaya Prakash Reddy, Duvvasi Mohan and Fish Venkat. All these three save the film and manage to entertain the audience decently.

Heroine Nandini looks good and carries her role well. Climax of the film has been designed well. Saptagiri’s entry makes it more comical and ends the film on a happy note. Chandra Mohan is apt as the school teacher.

Abhimanyu Singh is ok as the bad guy and so is Praveen as Sudheer Babu’s friend. Second half of the film is decent when compared to the first as the actual story kicks off during the interval.

One of the biggest drawbacks of the film is the first half. There is nothing much happening during this time as the film is unnecessarily dragged by Sudheer Babu’s love track. Mosagallaku Mosagadu also suffers from the tag of predictability. Twists and turns that are showcased are predictable and can be guessed most of the times.

The movie has been promoted as the sequel of Swami Ra Ra but it does not have the style or depth Swami Ra Ra had. Heroine Nandini has nothing much to do in the second half. Certain scenes like Chandram Mohan’s school track creates a bit of confusion for most of the time and is only explained during the fag end of the film.

Yet another major drawback is that the film lacks the necessary pace. Crime thrillers are often racy and have some very interesting con scenes which are missing in this flick. The cop character looks jaded and has no depth in the film at all.

Camera work is pretty good and presents the film in a decent light. Screenplay of the film is just about ok as some unnecessary scenes disturb the flow of the film. Dialogues are ok and so is the editing. Music is just average as none of the songs manage to register.

Coming to director Nellore Bose, he does an ok job with the direction. Even though he falters with his narration during the first half, he covers it up with the comedy angle in the second.

On the whole, Mosagallaku Mosagadu will provide a decent relief for Sudheer Babu’s career. A slow first half and predictable nature of the script are basic drawbacks. If you manage to sit through the first half an hour and stop looking for logics, you can easily give this film a shot for its decent comedy in the second half.