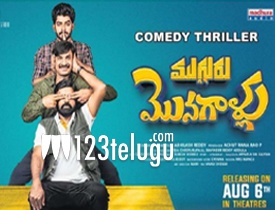 Along with a number of low-budget films, yet another movie that has hit the screens is Mugguru Monagallu. Let’s see if it tickles our funny bones or not.

The film is about three friends, Sushanth(Srinivasa Reddy), Kishore(Dikshith Shetty), and Deepak(Vennela Ramarao). While Sushant cannot hear, Kishore cannot speak and Deepak is a blind man. One fine day, these three friends find out a clue about the ongoing murders in the city and make a plan. What is that plan? and who is behind these murders? and how do these handicapped people handle the case forms the rest of the story?

Srinivasa Reddy is the biggest highlight of the film. He does well and evokes good laughs in his role. Dixit Shetty and Vennela Ramarao have also done well in their roles. Especially Vennela Ramarao, he was quite good as the blind man was amazing. In a way, you can say that these three actors have evoked fun in even silly situations.

Raja Ravindra, who did the role of a cop was also impressive in his crucial role. The drama created behind the serial murders was also good. A few suspense scenes created in both halves were handled well. The actress who played the main lead was just about okay.

The film had a good scope to create solid suspense and drama behind the murders but the director used it only to an extent. His focus was mostly on entertainment and he missed out on several aspects because of this.

The film is filled with multiple tracks but the director failed to do justice to each one of them and that is where the film does not become a full-fledged comedy or serious drama and is stuck in between. There are so many silly and unwanted scenes in the film that deviate from the good storyline.

The music of the film is below par and so was the camerawork. In fact, it was quite below par in a few scenes in the second half. Editing is a big letdown and so was the production design. Dialogues are decent and so was the whole backdrop of the film. As said earlier, the director has missed out on many aspects as his story is god but his execution was disappointing.

On the whole, Mugguru Mongallu is a comedy thriller that tries too hard to impress. Though Srinivasa Reddy and a few thrills impress, the film fails to create an impact and is neither a good thriller and a comedy caper. Watch it only if have absolutely nothing else to do.