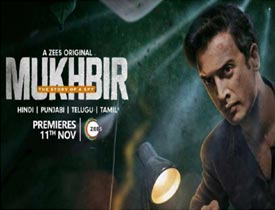 The OTT platform ZEE5, which has been offering good content lately to its viewers, has now come up with a spy series titled Mukhbir: The Story of a Spy. The series is currently available for streaming. So let’s see how it is.

The plot is inspired by the book Mission To Kashmir: An Intelligent Agent in Pakistan, written by Maloy Krishna Dhar. Set in the 1960s, a few Indian agents working discreetly in Pakistan get captured and killed by Pakistani ISI. At the same time, SKS Moorthy (Prakash Raj), a spy agent working in Indian Intelligence Bureau, comes across a thief, Kamran Baksh (Zain Khan Durrani), and gets impressed by his intellect. So Moorthy convinces his higher officials and recruits Kamran for a secret mission. Moorthy sends Kamran to Pakistan to learn the military secrets there and to stop the possible war that might emerge between both nations. Did Kamran achieve his mission? What are the challenges he faced during this? This form the crux of the story.

The sets erected, the locations chosen, and the old model scooters and cars used very well resemble the 1960s. The technical team needs to be appreciated for recreating the 1960s era, which immerses us nicely into the series. The kind of devices used by spy agents to deliver messages and the code language they use not to get traced by enemies was well depicted in the series.

The series gets pretty exciting from the mid portions with many chills and thrills. Not one, but there are a lot of instances where the character Kamran almost gets caught by the Pakistan army and ISI. These sequences create a tense atmosphere and intrigue one to see how he gets out of them. The brilliance in writing can be found here.

Zain Khan Durrani, who played the lead actor, is apt in the spy role. He performed with aplomb in every scene, and in the emotional sequences, his acting was splendid. Prakash Raj gave a very good performance as Moorthy. The best part is Dilip Shankar, who was menacing as Colonel Zaidi. His beautiful portrayal as the hardcore superpatriot concerned about his country’s safety stands out. The rest of the cast is good, too, in their given roles.

The series takes much time in the initial episodes to get going. In addition, the screenplay here is a tad slow. The character introductions need better presentation. It would have been much better had the series depicted the training given to the lead actor. Generally, the training given to these spy agents plays a crucial role in their survival in the enemy country, and hence showcasing this aspect would have brought depth to the series.

In a few sequences, the continuity factor is missing. The makers should have opted to have the own voice of Prakash Raj in Telugu too. As we are seeing him for many years, it becomes a bit uncomfortable and affects the viewing experience. The filming of the action sequences is not that good, which disappoints as the series is a spy thriller. In addition, the separate romantic tracks in the series were not that great, leaving scope for improvement.

Technically the series is brilliant. The music by Abhishek Nailwal is in tune with the mood of the series. The cinematography is neat and captures the locations in a realistic manner. The production design is exquisite, and the makers spent nicely on the series. However, the editing in the initial episodes could have been better. There are some dubbing and mixing issues that need rectification.

Coming to the directors Shivam Nair and Jayprad Desai, both did a decent job with the series. While the character establishment and initial parts of the series could be better, the directors successfully ran the series on an exciting and thrilling note with mid and ending portions. The casting was apt, and the writing was good. But the show didn’t go to the next level due to a few issues mentioned.

On the whole, Mukhbir: The Story Of A Spy has exciting moments and thrilling factors from the mid-part. The challenges a spy faces to protect his nation from an enemy country are nicely showcased. But the slow narrative in the starting portions and issues in certain aspects brings down the overall impact. Nonetheless, the show ends up as a decent watch this weekend.