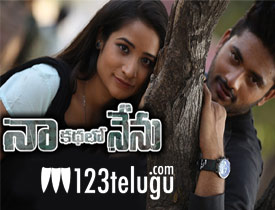 Continuing the trend of low budget films, a new film which has hit the screens today is Na Kadha Lo Nenu. Let’s now see how the film turns out to be.

Sanjay(Samba Siva) and Priya(Santoshi Sarma) are a doting couple who lead a normal and happy life. The twist in the tale arises when Sanjay lands deep into trouble and has to pay a sum of one crore rupees to solve a major issue in his life. What is that problem? Whom does Sanjay have to pay one crore? and how does he manage to solve his problems? That forms the rest of the story.

The basic twist that is showcased regarding the money issue has been executed quite well. Things become a bit interesting once this twist is revealed in the film. The manner in which today’s generation goes to extreme lengths for money has been showcased in an innovative manner.

Some emotional scenes which come during the pre-climax have been dealt well and bring a lot of depth to the proceedings. Heroine Santoshi Sharma is the best of the lot and does her job quite sincerely. Rest of the supporting cast is just about okay.

Right from the story to the execution, this film has many demerits. The plot is water thin and does not create much interest for the audience. Most of the scenes are quite predictable and you clearly understand what is going to happen next.

The execution of the plot is not up to the mark as the emotions are not carried away in a proper manner. The love track is boring as the much-needed chemistry between the lead pair is completely missing in the film. Adding insult to injury are the songs which come as huge speed breakers in the movie.

Camera work is pathetic and looks even bad than that of a short film. Music by Navneet is quite disappointing as none of the tracks impress us. Production values are just about okay. Editing is decent but a few scenes in the second half could have been edited out. Coming to the director Siva prasad, he has done a pretty ordinary job with the film. Neither his story is new nor his execution was spot on. His effort is half baked and ends up disappointing the audience completely.

On the whole, Na Kadha Lo Nenu is a message oriented film which goes wrong right from the story to its execution. Lack of gripping scenes and basic thrills kill the interest of the audience completely. With not many known faces, things will be quite difficult for the movie to survive at the box office and makes it a disappointing watch this week.