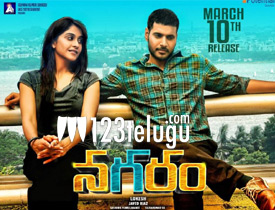 Sundeep Kishan has been going through a lull in his career of late. Losing no hope, he is back with a crime thriller called Nagaram. Directed by Lokesh, let’s see how the film turns out to be.

The story of the film is based on four parallel stories and how everyone including Sundeep Kishan, a reckless youth, and Regina Cassandra get engrossed in a kidnap drama involving a deadly goon’s son. Rest of the story is as to how these stories unfold during the course of time and what happens to each of them in the end.

Sundeep Kishan sheds his hero image and becomes a character in the film. Right from his looks to his taut performance, Sundeep slips into his careless role with ease and gives a sincere performance. Young hero Shri, who did the role of a software engineer is pretty decent. The first half has some decent moments as the kidnap drama is executed in a very interesting way.

The second half gets exciting as every character gets involved in the proceedings quite convincingly. The film has many subplots which have been mixed well in the screenplay. Also, the way various crimes that are carried out in a city like Chennai have been shown very realistically.

Regina Cassandra does not have much to do in the film. Even though the film has a superb screenplay, too much time has been taken to establish the characters from the start. Films like these need to be very crisp with taut editing and racy runtime but Nagaram has many scenes which are a bit stretched out.

The film takes its own sweet time to reach the interval. Even though the film is quite interesting, at times you feel that the narration is getting repetitive.

Nagaram is high on technical aspects. The camerawork by Selvakumar is astounding as the crime thriller is showcased in a realistic manner. The way Chennai and its interiors have been showcased looks superb on screen. Production values are top notch and the dubbing done is adequate. Special mention should go to the sound design department who have done a marvelous job. Even the normal thrills have been elevated with a thumping background score.

Coming to the director Lokesh, he has done an excellent job with his narration. Credit should go to him for combining four parallel stories into one and extracting some top-notch performances from his star cast. The interesting aspect is that Lokesh does not take cinematic liberties and explains every link and twist with utmost detail.

On the whole, Nagaram is one film which will bring Sundeep Kishan back in the game for sure. His sincere performance, engaging narration and realistic set up are huge assets of this film. If you ignore the slightly slow pace at times and lack of basic entertainment which you expect with regular Telugu films, Nagaram ends up as a decent watch for all those who love crime thrillers.