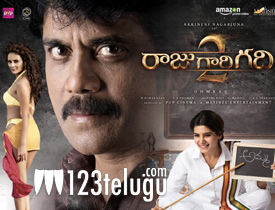 Raju Gari Gadhi 2 is one film which is being eagerly awaited all over. The film starring Nagarjuna and Samantha has finally hit the screens today. Let’s see whether it lives up to its expectations or not.

The story of the film is set amidst a resort which is owned by three close friends. As time passes by, the boy gang starts facing weird experiences through an evil spirit(Samantha). Left with no choice, they approach a mentalist called Rudra(Nagarjuna). Who is this evil spirit? What does it have to do with the resort? How will Rudra deal with the entire scenario? That forms the rest of the story.

One of the biggest assets of the film is Samantha’s role. The star heroine is quite endearing as the spirit who goes through a lot of problems in the past. Sam’s performance in the climax is pretty good as she evokes superb emotions through her expressions. Nagarjuna does his role convincingly and does not go off board. He brings a lot of depth to the film with his screen presence. His confrontation scenes with Samantha during the climax have been nicely executed.

Vennela Kishore manages to evoke some laughs here and there. The second half of the film has decent emotions and right after Samantha enters, things get interesting.

Thaman’s background score is yet another highlight as he elevates the film quite well. Seerat Kapoor provides the necessary eye candy. Also, the cause for which Samantha gets into all sorts of problems has been showcased quite well.

One of the biggest drawbacks is the lack of comedy. The fun that one expects from this franchise is clearly missing here. The comedy created by the three friends works only in parts.

The first half of the film is a bit of a let down as there is nothing much happening here. There is no horror or comedy and this is where the film drops. Yet another drawback of the film is that it is completely predictable. Storywise, it is the same horror thriller of a girl getting killed because of her problems and she taking revenge.

Production values of the film are top notch as the film looks quite rich in quality. The proceedings, visuals and the graphics have been done quite well. As said earlier, music by Thaman is very good. Dialogues are decent and so was the entire set up of the resort where the entire film takes place. The camerawork was quite beautiful as it showcased the horror effects and beach sorroundings in a good manner.

Coming to the director Ohmkar, he has taken the basic story of Malayalam film Pretham and has weaved a story around it. The way he has showcased Nagarjuna and Samantha in their roles during the second half is the biggest asset of the film. Sadly, he disappoints in the comedy and horror department. There was so much scope of both horror and comedy elements which Ohmkar did not utilize at all and made the film quite simple.

On the whole, Raju Gari Gadhi 2 is a melodramatic thriller which has some good moments here and there. Things become interesting only because of Nagarjuna and Samantha’s superb performances during the second half. All those who expect good comedy and horror because of the name associated with the franchise will be a bit disappointed. The scenario is such as the film does not disappoint or excite you completely and ends up as a decent watch because of its star cast.