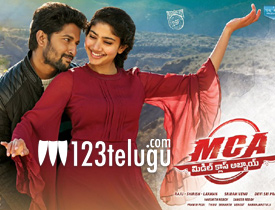 Natural star Nani, is in full swing with back to back hits in his career. His new film is MCA which has been produced by Dil Raju. Touted to be an action family drama, this film has hit the screens today. Let’s see how it is.

Nani(Nani) is a middle-class guy who stays with his sister in law(Bhumika). He leads a happy go lucky life with his girlfriend(Sai Pallavi) but things change all of a sudden when his sister in law who is a government servant lands into problems with a dreaded criminal(Naresh Vijay) in Warangal. Rest of the story is as to how a simple guy like Nani confronts the dreaded gangster and saves his sister in law.

MCA works only because of Nani’s star value and amazing performance. Right from the word go, it is Nani and his captivating screen presence which makes matters work. He is perfect as a middle-class guy and carries the entire film on his shoulders.

Apart from Nani, Bhumika has a major role and she makes a perfect comeback in a good role. Her chemistry with Nani is spot on as both the seasoned actors hold the proceedings well most of the time.

Sai Pallavi plays her supporting role well and is good in the first half. The main villain, Naresh gets a meaty role and he is good in his character. The first half has some good moments like Nani’s comedy episodes with Bhumika and Sai Pallavi.

The basic drawback of the film is that there is no entertainment in the second half. The film gets quite serious as it is only a cat and mouse game that becomes the main agenda.

Even though the villain does well, his track could have been made more effective. The first half an hour of the second half has nothing great to boast about as the film dips to an extent.

The story of the film is quite old and does not have any novelty in it. You exactly know what is going to happen next. If not for Nani’s agile performance, this film would have been a bit disappointing.

Production values by Dil Raju are pretty good as the film is showcased in a decent manner. The way Warangal and its surroundings are showcased through some good camerawork is yet another bonus. Dialogues have been written well and give a lot of depth to the proceedings. Surprisingly, DSP’s music is quite disappointing as none of the songs manage to impress. The fights composed look decent on screen.

Coming to the director Venu Sriram, he has chosen a very old story and has tried to make it novel by Nani’s interesting character. Apart from Nani and Bhumika’s role, none of the proceedings in the second half manage to create an impact. Though Venu narrates the first half quite decently, it is the second half where things fall apart and the film looks interesting only during the last fifteen minutes.

On the whole, MCA is a routine commercial entertainer which does not have any novelty story wise. But it is Nani’s who leads from the front and makes things interesting. His comedy, angry avatar in the second half holds things together and saves the film from going haywire. If you ignore the predictable proceedings, Nani makes sure that MCA ends up as a one time watch this weekend.