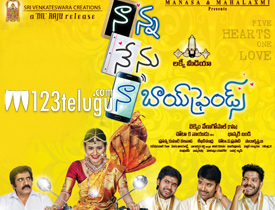 Hebah Patel is on top of her game right now with back to back hits. She is once again back with yet another fun entertainer called Nanna Nenu Na Boyfriends which has hit the screens today. Let’s see how it is.

Padmavati(Hebah Patel) is a village girl who comes to the city for her further studies. Her father(Rao Ramesh) wants to marry her off in a traditional family but Padmavati wants to have a love marriage of her choice.

During this time, she comes across three young guys called Gokul(Noel), Nani(Ashwin) and Namo(Parvatesam) and starts liking them individually. The twist in the tale arises when her father comes to know of the weird situation that his daughter has landed into.

What will Padmavati do now? How will she convince her father? and whom will she marry at the end? That forms the rest of the story.

One of the biggest assets of this film is the interesting story line. Credit should go to writer Sai Krishna for coming up with an intriguing plot of a girl loving three guys at a time. The emotional scenes which come during the pre-climax and climax are superb and have been executed quite well by director Bhaskar Bandi.

Hebah Patel is quite impressive in the lead role. She had a lot of scope to perform and has done quite well for herself. As usual, Rao Ramesh impresses yet again in a solid way. The way his role has been inserted into the main plot is quite good.

Comedy track featuring Jabardasth comedians works well most of the time. Tejaswini does a wonderful job as Hebah’s friend. Her casting is quite good and the talented actress ably supports Hebah through the film.

The screenplay goes for a toss during most of the times in the film as many unnecessary scenes come at regular intervals and disturb the flow a bit. The emotional relationship between the father and daughter could have been explored a bit better by the director.

Dialogues written by Prasanna Kumar are surely worth a mention. Especially, those written for Rao Ramesh are quite good and meaningful. Chota K Naidu’s camera work adds a special edge as all the visuals are quite youthful. Shekhar Chandra’s music is good as all the songs have been composed quite well.

Coming to the director Bhaskar Bandi, he does a decent job with the film. Even though the film is mostly predictable, the way he has dealt with it and narrated the movie in a simple and neat manner is quite good.

On the whole, Nanna Nenu Na Boyfriends is a unique romantic drama which has some decent moments. Hebah Patel and Rao Ramesh’s performance and some strong emotional scenes are basic assets. On the flipside, routine love scenes and a predictable first half make the film go down at times. Finally, if you like love stories with a twist and a bit of father sentiment, you can give this film a shot.