Review : Napoleon – Thrills only in bits 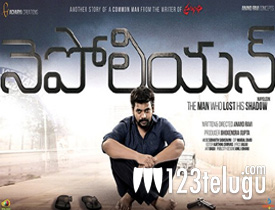 Napolean is one film which has created a decent buzz with its interesting trailers. The film has hit the screens today and let’s see how it is.

The film is set amidst a cop set up as a man called Napoleon(Anand Ravi) visits the police station and lodges a complaint that his shadow is missing. This case confuses the entire department and very soon Napoleon becomes the talk of the town. Upon investigation, Napoleon also reveals that God has come into his dream and revealed that a certain accident case is actually a murder mystery. The cops get even more confused and start investigating the case.

Who is this Napoleon? What are his problems? What is the shadow issue all about? and how is it connected to the case? That forms the rest of the story.

The basic plot of the film is quite interesting. A man lodging a complaint that his shadow is lost and the entire murder case linked to it looks quite naive. The various twists that are showcased in the film are decent.

The first half of the film is pretty decent as a good suspense element is created throughout the first half. The way the cops also handle the case looks quite natural.

Director Anand Ravi plays the lead role and he is pretty decent. The mainstay of the film is Ravi Varma who plays his cop role quite convincingly till the end.

Even though the second half is thought of well, the basic spirit angle connected to the murder case is not that convincing. Director Anand Ravi should have left the proceedings with the basic twist and not used the supernatural element at all.

Even though the director Anandi Ravi did a decent job as an actor, a better and famous hero could have elevated the film in an even better manner.

Production values of the film are decent for this low budget film. The screenplay is quite gripping for most of the time but loses steam during the pre-climax. Background score is pretty impressive and so was the art direction. Coming to the director Anand Ravi, he has written the script well but dragged it a lot during the second half. Had he eliminated the supernatural element and narrated the film with a proper crime backdrop, Napoleon would have been a good thriller.

On the whole, Napoleon is a crime thriller which has some interesting moments here and there. The first half is gripping but that interest is spoiled during the later part because of some silly supernatural element which deviates the audience attention. Also, the lack of known faces can go against the film’s run. If you are the one who likes thrillers with ample twists and do not mind the dragged narration, you can give th is film a shot. But for the rest, it is just a below average watch this weekend.