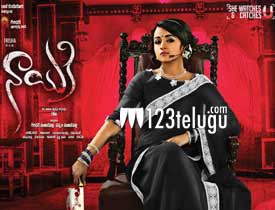 After creating a lot of buzz with its posters, Trisha’s Nayaki has finally hit the screens all over today. Let’s see whether it manages to impress us or not.

The story of Gayatri is quite routine and is set amidst an haunted house on the outskirts of Hyderabad. Sanjay(Satyam Rajesh) and his girlfriend Sandhya(Sushma Raj) decide to get away from the city to have a good time during the weekend.

As they begin their journey, some unwanted incidents happen and the couple end up taking shelter in this haunted house. Unaware of the fact that the entire bungalow is possessed by an evil spirit called Gayatri(Trisha), the couple start settling down.

As expected, Gayatri starts getting behind their lives and keeps scaring them to death. Who is this Gayatri ? What does she have to do with the haunted house ? and how do the couple survive this chaos ? That form the rest of the story.

One of the biggest plus point of the film is Trisha’s character. The way her role has been conceived and executed right through the first half is very good. The various scenes that showcase her weird behavior, transformation as a movie star looks quite novel.

Trisha stays true to her role and does a superb job. Once again, Satyam Rajesh excels in his character and gives a superb performance. Though his character had negative shades, the way he has drawn a balance between comedy and serious scenes is very good.

Young actress Sushma Raj does a wonderful job in her innocent role. The opening sequence and Trisha’s entry are the major highlights of the film. The justification that has been given to the title Nayaki at the end is well executed.

The basic backdrop and template of the film is quite routine and old. Many directors have made films on such subjects many a times in the past. After a promising start to the film, the second half goes for a toss. So many irrelevant scenes take centre stage as the main topic is deviated after a while.

There are certain scenes which are quite predictable and do not offer any new to watch out for. The same old scenes like heroine having an unbearable past and how she is cheated, everything gets quite predictable in this film.

Also, the flashback shown does not create any interest whatsoever. Adding insult to injury, a song called Bhadrakali tests your patience big time. Even the so called horror elements showcased during the second half fail to excite you.

Camerawork by Jagadish is quite impressive. The mood that needs to be generated for every horror film has been carried out quite nicely through his brilliant lighting. Raghu Kunche’s music is just about average. Editing is below par and so are the production values.

Coming to the director Govi, he has done quite a routine job with his narration. The premise chosen, his narration and many scenes written throughout are highly predictable. Only solace in his direction is the way he has showcased Trisha in a new way.

Nayaki is yet another film which has been made to just cash in on the craze of horror comedies. But sadly, neither its thrills or the comedy engrosses you for most of the film. Except for Trisha’s novel character, this film has nothing much to offer and ends up as a routine and predictable thriller which can be watched when it is aired on TV.