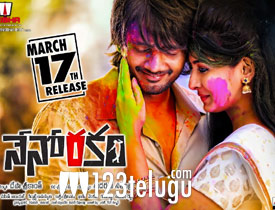 Hero Sai Ram Shankar has been trying hard to get that one good hit in his career. His long-delayed film, Nenorakam has finally managed to hit the screens. Let’s see whether it gives him his much-needed break.

Gautam(Sairam Shakar) is a loan recovery agent who tries hard to woo Swecha(Reshmi Menon) and finally wins her love. Just when things seem to go absolutely fine, Swecha gets kidnapped and Gautam is forced to commit different crimes to save his girlfriend.

Who is this kidnapper? What does he have to do with the couple? and how does Gautam save his love interest? That forms the rest of the story.

The second half of the film is where the actual drama begins. The entry of Sarath Kumar and how he takes things in his hands with a decent kidnap drama looks good. The film moves on a crisp note from there and the reason for which Sarath Kumar does all the kidnappings is also shown convincingly.

Sai Ram Shankar looks and performs quite well from his all previous films. His performance in crucial situations and the way he confronts Sarath Kumar is very good. All the scenes featuring both these stars have been executed nicely. Some comedy scenes featuring Viva Harsha work well.

Heroine Rashmi Menon looks good and suits her girl next door role. Last but not the least, Sarath Kumar is the backbone of the film. The senior actor gives a settled performance and is particularly good during all the emotional scenes.

The first half of the film is quite bland with not much happening during this time. When the makers are already trying to run the proceedings with some over the top comedy, three songs come in as huge speed breakers and spoil the mood of the film completely.

Prudhvi’s comedy track looks forced and does not entertain one bit. A sensuous song breaks out from nowhere when the film is moving on a racy note. The makers do not find much stuff to entertain the audience during the first half and create unnecessary tracks and scenes which bore the audience.

Music by Mahit Narayan is pretty good but sadly, all the songs have been placed in wrong areas. Camera work is very good and captures all the rustic Hyderabad locales nicely. Production values are impressive. The film still needs serious editing as some comedy scenes and two songs can be easily edited out. The screenplay of the film catches up only during the second half and saves the film.

Coming to the director Sudarshan, he has done a decent job with the film. His plot is good as he executes it convincingly during the second part. All the thrills shown are realistic. Had he induced the kidnap drama during the first half itself, things would have been even better.

On the whole, Nenorakam is surely a better film when compared to Sairam Shankar’s previous duds. The suspense-filled second half and kidnap drama are good assets. But, it is the first half which is slightly below par. If you manage to sit through this routine and mundane part, this film ends up as a decent watch for the rest of the time.