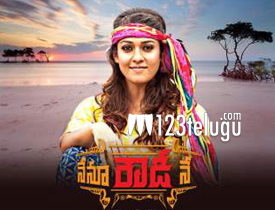 Continuing with the trend of dubbing films, yet another project which has hit the screens today is Nenu Rowdy Ne. Starring the talented Vijay Sethupathi and Nayanthara, this film has music by Anirudh. Let’s see how the film turns out to be.

Right from his childhood, Pandu(Vijay Sethupathi) always dreams of becoming a rowdy. Even though his mother is a strict police officer, he manages to become a small time goon and does settlements without his mother’s knowledge.

On the other hand, Kadambari(Nayanthara) is a partially deaf girl who is on the look out for her father who has been missing after taking on a dreaded criminal called Killi Babji(Parthiban).

One fine day, Kadambari meets Pandu and narrates her dreadful story. Cupid strikes Pandu and he decides to help Kadambari at any cost. Rest of the story is as to how Pandu manages to find Kadambari’s father and also takes on the powerful Killi Babji.

One of the biggest plus points of the film is the way revenge drama is narrated in a funny manner. There is a freshness in the way the proceedings are unveiled to the audience. The love track between the lead pair and the way Vijay Sethupathi plans the revenge drama, everything has been showcased well.

Coming to the performances, Vijay Sethupathi is tailor made for this role and brings the house down on fire with his antics. Nayanthara looks gorgeous and is quite cute as the partially deaf girl. Partiban is impressive in his negative act and the way he has been showcased is also quite new. Pre-interval and interval bang is handled well.

As the twists are revealed in the first half itself, the second half has nothing much new and moves around a single point. Climax also becomes quite predictable and all the scenes which come during this time have not much effect.

Post the interval, first fifteen minutes gets bogged down. As the film is a dark comedy, the satirical fun that is generated might not go well with certain section of the audience.

The film is devoid of regular commercial elements and might not go well with the mass audience. The way important points in the story are transformed and unveiled lacks clarity.

Camera work suits the mood of the film and showcases the rustic visuals well. Music by Anirudh Ravichander is a major plus for the film. All the tunes are quite peppy and have been designed nicely. Credit should go to the way Anirudh has composed a unique background score for the film.

Coming to the director Vignesh Shivan, he has done an okay job. The way he has written his script and executed the revenge drama in a funny way is quite new and unique. But the way he has messed up the second half and makes the the proceedings predictable is a bit disappointing.

Overall, Nenu Rowdy Ne is a new age dark comedy which is narrated with a unique style and ample comedy. Stunning performances by Vijay Sethupati and Nayanthara makes things lively. But a lack luster and predictable second half and certain silly scenes in serious situations spoils the fun to an extent. All those who like crime comedies might like this film, but for others they can watch it if they have absolutely nothing else to do.