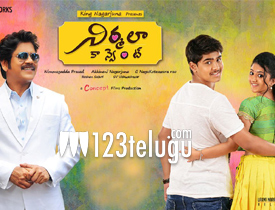 The wait is finally over as the debut film of Srikanth’s son Roshan is finally here. Titled Nirmala Convent, this film is produced by Akkineni Nagarjuna and Nimmagadda Prasad. Let’s now see how this film turns out to be.

Sam(Roshan Srikanth), who belongs to a poor family falls in love with his classmate Shanthi(Shriya). When things in the teenage love story seem to be going just fine, an ancestral dispute among the lead pair’s families causes the couple to break up.

Left with no choice, Sam approaches Shanti’s family and asks for her hand. This causes even more distress to Shanti’s dad who poses a huge challenge for Sam. What is that challenge ? How does Sam overcome it ? and what problems does he face in his journey ? That forms the rest of the story.

Nirmala Convent is a perfect launch pad for Roshan. The young boy had scope in every which way to showcase his all-round skills. Not only does he look good, but the way the young guy emotes on screen is impressive. He has a stunning screen presence and the required innocence which suited his role well. For a guy who is making his debut at such a young age, he has done a tremendous job.

The film picks up a good pace from the second part right after Nagarjuna’s entry. The game show, Nagarjuna’s performance elevate the film to a decent level. As usual, Nagarjuna is a charmer and plays the sheet anchor’s role well. Suma’s son Roshan does his supporting role decently.

A special mention should go to the heroine Shriya who has also done a very god job in the film. She is quite talented and emotes supremely well throughout the film. Tagubothu Ramesh brings some laughs to the proceedings.

The first half of the film is a bit slow and takes much time to reach the interval block. The game show is a bit predictable as some more twists could have made the film even better.

The challenge posed for a teenager and the way he achieves his goal looks a bit too cleashed at times. Certain love scenes centered around the lead pair could have been trimmed during the first half to make the film a bit more realistic.

Music director Roshan Salur, does a superb job with the music score. All his songs are very good and have been placed quite well. Production values are superb and the way the village set up, palace and the entire game show is showcased through wonderful cinematography is awesome. Dialogues are decent and so was the screenplay.

Coming to the director Naga Koteswara Rao, he has done a decent job with the film. He does not go overboard and narrates the film in a simple and decent tone. He scores points for the narrating the film in a thrilling manner during the last 15 minutes.

On the whole, Nirmala Convent is a perfect launch pad for Roshan Srikanth. The young hero shines in his role and surely has a rocking future ahead. The film also has some decent moments and moves at a simple pace. If you ignore the slow first half and predictable nature of the film, you can give this film a shot for its innocence and Nag’s cameo.